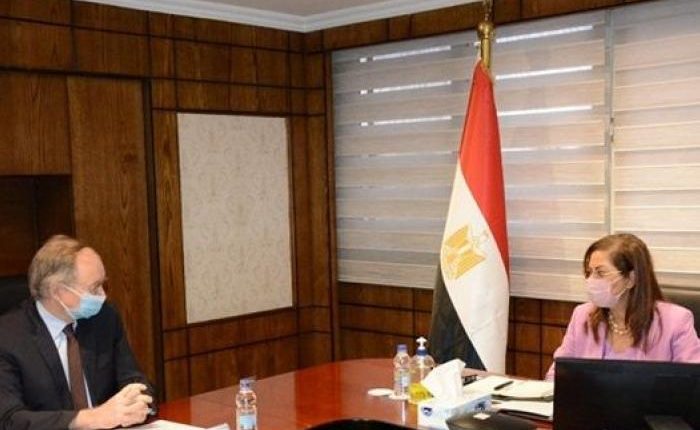 Egypt’s Minister of Planning and Economic Development Hala El-Said has met with EU Ambassador in Cairo Christian Berger and his accompanying delegation to discuss methods of enhancing joint relations.

During the meeting, the two sides also discussed Egypt’s plans to increase investments in the coming phase.

According to a ministry statement released on Monday, El-Said said that the key factor in Egypt’s investment plan for the current fiscal year (FY) is increasing investments in the human capital. This will see a focus particularly on health and education, as well as other logistical sectors.

Ibrahim El Afia, in Charge of Cooperation at the EU in Cairo, and Neven Ahmed, Director of the Governance and Gender Equality Programme, also attended the meeting.

During the meeting, El-Said reviewed the pre-emptive strategies adopted by her ministry to relieve the economic and social impacts of the novel coronavirus (COVID-19) pandemic on the Egyptian economy.

She asserted that Egypt’s strategy in this regard was based on striking a balance between the citizens’ health and economic activity.

The minister also briefed Berger on Egypt’s structural reforms, noting that the government was committed to following up the second phase of the economic reform programme. This came as part of efforts to create new job opportunities, improve the business climate, and enhance local industries.

El-Said addressed the discussion about Egypt’s Vision 2030, explaining that the process of modernisation continues, according to changes at the local, regional and international levels.

She noted the participatory effort undertaken by the Ministry of Planning and Economic Development, in cooperation with all ministries and all stakeholders from the private sector and civil society, in updating the vision.

The meeting also covered the current EU programmes and proposals for fostering cooperation with Egypt in the coming phase.

Berger, for his part, praised the EU’s relations with Egypt, which he sees as a basic partner for the EU in the Middle East. He also voiced hope over deepening partnership with Egypt in all fields.