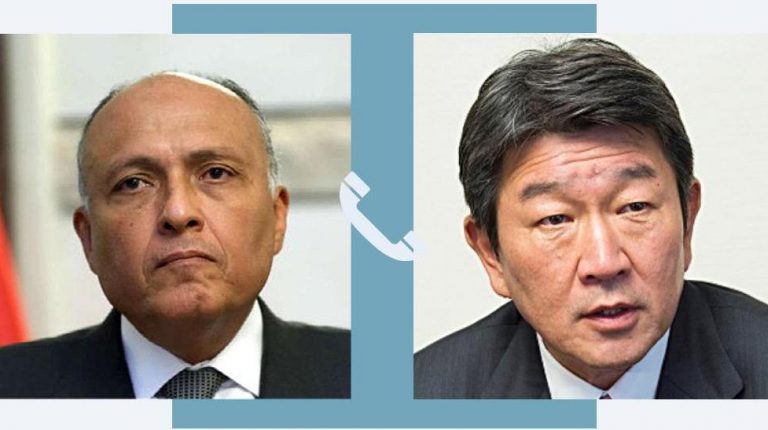 Egypt’s Minister of Foreign Affairs Sameh Shoukry has held a telephone conversation with his Japanese counterpart Toshimitsu Motegi to discuss bilateral relations and a number of regional and international files.

During the conversation, the two ministers discussed ways to advance and develop cooperation relations between Egypt and Japan in many fields. This included discussions on the latest developments on the regional and international arena.

Ahmed Hafez, Spokesperson for Egypt’s Ministry of Foreign Affairs, stated that Toshimitsu expressed his interest in listening to Egypt’s vision regarding the situation in the region. This is particularly in relation to the recent developments in the Palestinian issue.

He expressed his country’s appreciation for Egypt’s role, praising its recent continuous efforts in this regard, leading to a ceasefire and working to consolidate it.

Shoukry reviewed the Egyptian moves and contacts in this regard, as well as the file of reconstruction and support for development efforts in the rest of the Palestinian territories.

The minister also referred to the need for urgent action in order to revive the political track by launching serious negotiations between the Palestinian and Israeli sides.

Recent developments have demonstrated the centrality of the Palestinian issue and the danger of its continuation without a just and comprehensive solution to the conflict, Shoukry said.

Hafez added that the discussions also reviewed methods of advancing bilateral relations, within the framework of the distinguished relations between Egypt and Japan.