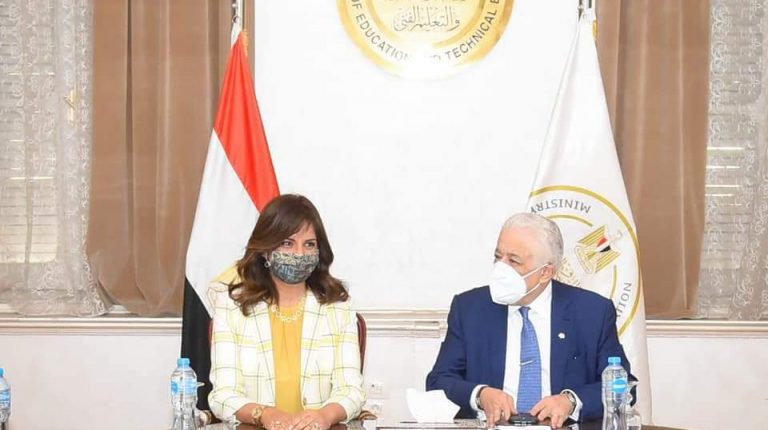 Egypt’s Minister of Education and Technical Education, Tarek Shawky, and Minister of State for Emigration and Egyptian Expatriates’ Affairs, Nabila Makram, signed a protocol, on Tuesday, to make Egyptian school curricula available online to expatriates as part of the “Speak Arabic” initiative.

Shawky highlighted his ministry’s effective cooperation with the Ministry of Emigration in implementing a number of joint projects. These came as part of the state’s strategy “Egypt Vision 2030”, to preserve the Egyptian identity.

He hailed the “Speak Arabic” initiative, which was set up with President Abdel Fattah Al-Sisi’s support and launched by the Ministry of Emigration and Egyptian Expatriates Affairs. It aims to preserve Egypt’s national and cultural identity among expatriate children.

Shawky praised the cooperation with Dar Nahdet Misr in producing educational curricula for the Arabic language and religious education, in parallel with its digital content.

Meanwhile, Makram hailed the values ​​book that the Ministry of Education and Technical Education applied to the third grade, which encourages respect between people.

During the meeting, they discussed the importance of the “Our School” channel, in order to serve Egyptian communities abroad, and that the channel will present Egyptian values, history, ​​and culture.

The “Speak Arabic” initiative aims to promote the Arabic language and Egyptian culture among second and third generation Egyptians living abroad, with the aim of linking them to their motherland.