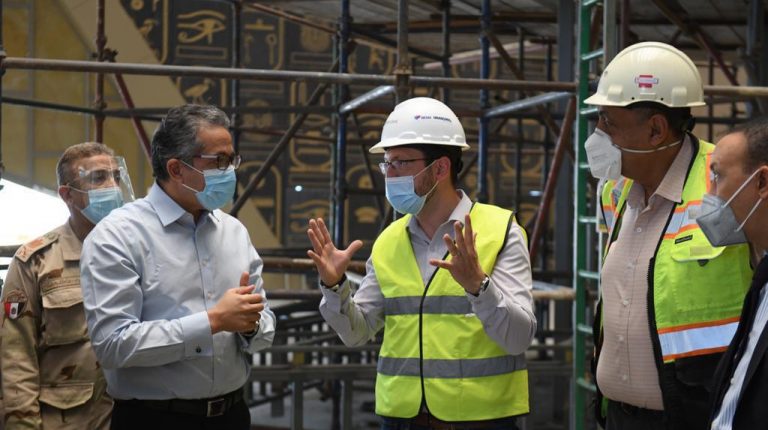 Egypt’s Minister of Tourism and Antiquities Khaled El-Anani visited the Grand Egyptian Museum (GEM), on Monday, to follow up on the progress of work on displays in the atrium, and the grand staircase.

The minister also reviewed the progress on displays in the two galleries devoted to the Pharaoh Tutankhamun.

According to a Ministry of Tourism and Antiquities press statement, 100% of the installation work on the artefacts in the atrium and the grand staircase has been completed. Work has progressed onto the fine restoration of the artefacts, which is currently taking place.

The statement noted that all 107 of the display cases in the galleries focusing on Tutankhamun, which have come from Germany and Italy, have been installed in their places. In addition, more than 65% of the treasures belonging to the Boy King have been placed in showcases according to the set display scenario.

Seeing the progress of work at the GEM, El-Anani thanked those participating in the work for their diligence to finish this magnificent, world class museum on time.

The museum, which has been built on a total area of 117 feddan in Giza, is the largest museum in the world dedicated to one civilisation, and its opening is eagerly awaited.

The GEM will feature a statue of Ramses II, along with an obelisk from his reign, with visitors able to view the statues of Ancient Egypt’s kings and queens as they proceed up the staircase.