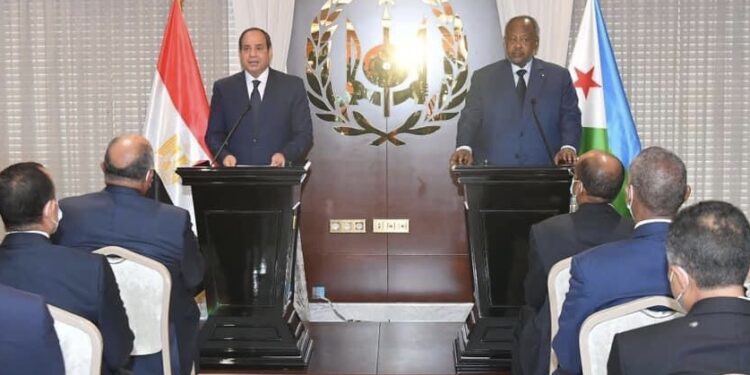 The historic visit by Egypt’s President Abdel Fattah Al-Sisi to Djibouti is the decisive step in tightening the screws on Ethiopia.

It was the first official visit of an Egyptian president in over 40 years. During the visit, the two sides discussed various files related to cooperation and ways to strengthen bilateral relations, especially on the security, military, and economic levels.

Djibouti was the last stop among the six countries surrounding Ethiopia, namely, Sudan, South Sudan, Somalia, Kenya, and Tanzania, all of which have security agreements with Cairo. This, of course, allows its territory to be used to carry out military operations, establish fixed or temporary bases, and exchange information.

This is not an indication of the resolution of the military option on the part of Egypt against Addis Ababa for its intransigence in the Grand Ethiopian Renaissance Dam (GERD) crisis, but instead the politics and security requirements to deal with strategic issues.

Djibouti also has another strategic importance, which is that 80% of Ethiopian trade passes through its territories, because Ethiopia is a closed country that has no outlets to the sea.

Egypt and Uganda also signed a military intelligence cooperation agreement, which establishes the continuation of cooperation between the two sides in the field of information exchange regularly, which is necessary to combat terrorism and other crimes.

Moreover, in addition to the existing cooperation between Egypt and Tanzania to build the Julius Nyerere Dam, there is coordination at the highest levels that currently exists between Cairo and Khartoum, and regular military exercises.

Without a doubt, coordination with the governments of South Sudan and Uganda is closely related to the GERD file. Other aspects that are closely related to the dam are the President’s visit to Djibouti, a country of great strategic importance for Egypt especially with its supervision of maritime traffic from the Bab Al-Mandab Strait, the southern entrance to the Red Sea towards the Suez Canal. Djibouti is also important as one of the countries in the Horn of Africa and East Africa.

It is worth noting that Egypt also has naval forces in the Bab Al-Mandab Strait, to maintain stability there in light of the Yemeni crisis. This was present even before the formation of the “Council of Arab and African States bordering the Red Sea and the Gulf of Aden” in January 2020, which includes Egypt, Saudi Arabia, Djibouti, Yemen, Somalia, Eritrea, Sudan, and Jordan.

These forces work for coordination and consultation on the Red Sea and the Gulf of Aden, enhancing navigation security, and protecting global trade passing through the Suez Canal. This is in addition to enhancing political and economic cooperation among the eight countries, following the Council’s founding charter.

From the beginning, the political leadership has dealt with the dam file as a national security issue, and it has decided its position more than once, considering that prejudice to any water drop from Egypt’s historical share is a red line that should not be approached.

Egypt also sees that the internal situation in Ethiopia is placing great pressure on Prime Minister Abiy Ahmed, to the extent that Cairo has always allowed some freedom to overlook some political games and provocative statements. This is with the intention of not harming the fragile state of the Ethiopian regime.

Despite this, it will not allow harm relating to the most serious life issue that concerns the future and survival of future generations of the people of Egypt, and it will not remain silent for long before the recklessness of the Ethiopian regime.

The Egyptian constants are well known. They can be summed up in not plunging Ethiopia into chaos, as this has serious repercussions on Egyptian national security.

Also part of this is finding a legal form recognised regionally and internationally to manage the Nile River away from the political conflicts or crises that might threaten the ruling entity in Ethiopia.

This is in addition to reaching a binding and legal agreement under the auspices of regional and international organisations that takes into account the historical rights of the downstream countries from exploitation or manipulation by internal or external parties.