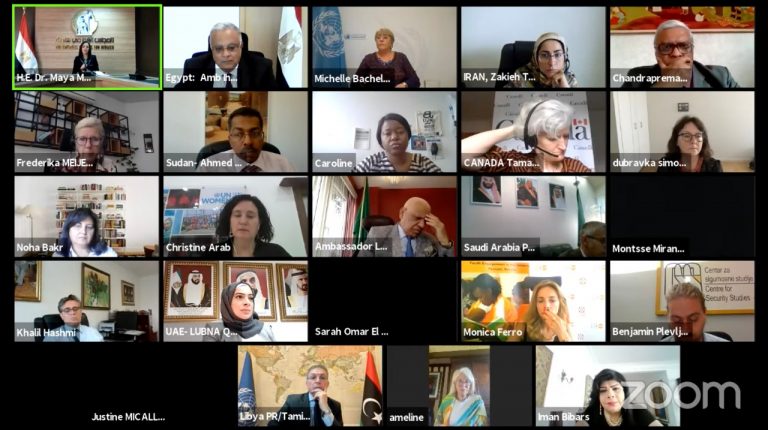 The Permanent Mission of Egypt to the United Nations (UN) in Geneva, in cooperation with the National Council for Women (NCW), organised a virtual seminar on efforts to combat violence against women in Egypt.

Michelle Bachelet, UN High Commissioner for Human Rights, gave an opening speech at the event. Bachelet noted the increase in cases of violence against women during the novel coronavirus (COVID-19) pandemic, explaining that combating violence against women is linked to human rights, including the right to life and equality.

She also praised the Egyptian efforts in this regard, most notably the development of a national strategy for women’s empowerment 2030. She praised, in particular, the efforts of the NCW and the National Committee for the Elimination of Female Genital Mutilation.

The main speaker in the seminar was NCW President Maya Morsi, and it was moderated by Ambassador Dr Ahmed Ihab Gamaleldin, Permanent Representative of Egypt to the UN in Geneva. Also participating were: Nicole Ameline, former French Minister and member of the Committee on the Elimination of Discrimination against Women (CEDAW); Dubravka Simonovic, UN Special Rapporteur on violence against women; Magued Osman, Member of the NCW and Director of the Baseera Center; Frederica Meijer, United Nations Population Fund (UNFPA) Representative in Egypt; Christine Arab, Representative of UN Women in Egypt; and Iman Bibars, Vice President of Ashoka Global and Regional Director of Ashoka Arab World.

During the seminar, Morsi reviewed Egypt’s efforts in eliminating all forms of violence against women, saying, “The Egyptian woman enjoys the presence of a political leadership that believes in the importance of her role, supports her capabilities, and is eager to give her the opportunity to contribute effectively in the development process that the country is witnessing.”

Morsi also pointed out that Egypt’s 2014 constitution obligated the state to protect women from all forms of violence directed against them.

She explained that during the past years, many laws were approved and amendments were made to them that guarantee full equality and equal opportunities for Egyptian women. This included toughening the penalties for female genital mutilation (FGM) and sexual harassment, and issuing a law criminalising the deprivation of inheritance.

Morsi pointed out that amid the pandemic in 2020, a law was issued to confront those evading the payment of alimony; a law was issued for the protection of personal data; and an amendment to a law was passed regulating some litigation statuses and procedures in personal status matters related to guardianship over money. In addition, a law came into effect to amend some provisions of the Code of Criminal Procedure by stipulating the non-disclosure of the victim’s data in crimes of harassment, violence, and indecent assault.

Morsi stressed that the state is working to eliminate all forms of violence against women in light of a specific strategic framework, which includes the National Strategy for the Empowerment of Egyptian Women 2030.

She noted that Egypt was the first country in the Arab region to launch a survey on “the economic cost of gender-based violence” in 2015.

Furthermore, Egypt established the National Committee for the Elimination of Female Genital Mutilation, co-chaired by the NCW and the National Council for Childhood and Motherhood (NCCM), in May 2019. The awareness campaigns carried out by the committee in all governorates reached more than 76 million contacts within two years.

Ameline praised the Egyptian Government for its efforts to combat violence against women, in addition to the role played by Morsi in this regard.

She also praised the national strategy for women’s empowerment and the legal framework for protecting women’s rights provided by the 2014 constitution.

Ameline called for a comprehensive approach to CEDAW’s cooperation with national human rights institutions and civil society, with the aim of preventing, not just combating, violence against women.

Emmeline also touched on the need to bridge the gap between the legal framework and practices, by properly preparing judges and law enforcement forces to deal with cases of violence against women.

Similarly, Simonovic praised Egypt’s efforts in combating violence against women, expressing her appreciation for the opportunity this session provides to exchange views with Egypt on the progress made in this field.

She noted that her role as Special Rapporteur is to encourage progress made and tackle issues that still need to be addressed.

Meijer hailed the national study on the survey of the economic cost of gender-based violence in Egypt 2015, through which the economic cost incurred was determined in addition to the Egyptian state’s efforts to combat FGM.

This contributed to a 63% decrease in cases, with Meijer also stressing their support for the Egyptian government to reduce the rates of female circumcision in Egypt to eliminate it completely by 2030.

“The root causes of violence against women, which are mainly due to some social norms, which must be addressed through education and work to change the societal view of women,” Arab elaborated.

Baibars presented in detail the four main pillars of combating violence against women, which are the need for political will, a legal framework, and mechanisms to implement the agreed legal framework, stressing the need to involve civil society in efforts state in this regard.

At the conclusion of the panel discussion, Gamaleldin stressed that holding this seminar comes within a series of events organised by the Permanent Mission in Geneva. It serves efforts to strengthen the relationship between the Egyptian Government and UN organisations.

It also aims to shed light on the efforts of the Egyptian government within the framework of an integrated strategy to promote and protect human rights in the country.