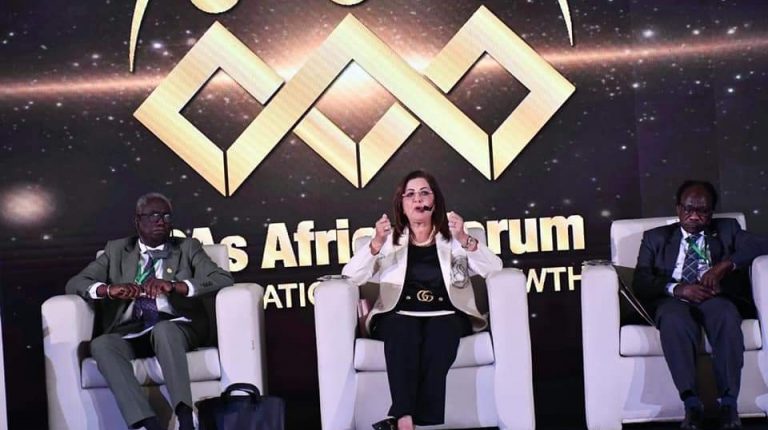 This came during her participation in First Edition of IPAs Africa Forum entitled “Integration for Growth”, held in Sharm El-Sheikh from 11 to 14 June.

El-Said’s took part in a session held during the first day of the first forum of the heads of African investment promotion agencies was entitled “Enhancing the Participation of the Private Sector: The Role of African Governments and Regional Partners”.

During her speech, El-Said pointed to the importance of the private sector’s participation in development efforts, as the partnership between the government and the private sector is one of the main pillars for achieving UN 17 SDGs.

El-Said explained that achieving sustainable development by 2030 requires concerted efforts and mobilization of all available resources from governments and the private sector.

“Africa is a continent of challenges and opportunities. It faces many development challenges, which have increased in severity with the Covid-19 pandemic, most notably the lack of sufficient funding. However, Africa’s Agenda 2063 recommends reforming the financing system and mechanisms for development plans,” El-Said said.

She added that, in recent years, many African countries have intensified the efforts of economic reforms, structural reform, and creating a business environment.

“During the past decade, 32 African countries were able to implement economic reforms, of which 22 countries were accompanied by structural reforms, which indicates Africa’s continued commitment to reform and the push towards prosperity,” She explained.

El-Said also pointed to the increasing population growth in Africa as one of the continent’s advantages, explaining that although it is a development challenge, at the same time it creates promising investment opportunities.

El-Said stressed that Africa is a young continent, where more than 60% of African citizens are under 30 years old, which means that the future of development on the continent is based primarily on the human element.

El-Said explained that this huge human force achieves abundance in the labor market and reduces the cost of operation and production, which creates many opportunities for investment in labor-intensive industries.

El-Said added that the continent of Africa possesses an abundance of natural resources, as well as comparative advantages in the banking, telecommunications, and infrastructure sectors, adding that those sectors that lead economic growth on the continent, and represent a promising opportunity for investment partnership, whether in cooperation with local or foreign investors.

El-Said added that the ratification of the African Continental Free Trade Agreement and its entry into force represent an important additional advantage that reflects positively on attracting foreign direct investment, especially in the manufacturing and services sectors.

On the manifestations of the Egyptian state’s interest in enhancing the participation of the private sector in development efforts, El-Said indicated the state’s keenness to prepare, formulate, implement, and update Egypt’s Vision 2030, through a comprehensive community partnership that includes the government, the private sector, civil society, and all development partners.

“Implementation of the first phase of the National Program for Economic and Social Reform also included the adoption of many incentive measures to create the business environment and opened the way for the private sector to participate in the implementation and management of infrastructure projects and to contribute to the development of the economy.” She explained.

El-Said added that the state implemented legislative and institutional reforms by issuing a package of laws and legislation aimed at simplifying the procedures for setting up projects and encouraging the private sector and local and foreign investment.

El-Said explained that infrastructure development and improving its quality is one of the main pillars of the Egyptian state’s efforts to stimulate the private sector.

El-Said stressed that the philosophy and direction of the Egyptian state are based on increasing public investments to prepare the infrastructure to be more stimulating for private investments and to attract local and foreign investors.

El-Said pointed to some major projects implemented by the state, including the development of the Suez Canal Corridor Project, the national road network project, the energy sector projects, the construction of the largest solar power plant in the world in Aswan’s Benban area, and the establishment of the New Administrative Capital.

El-Said added that the huge investments in infrastructure development contributed to the improvement of Egypt’s global competitiveness in many indicators, as the infrastructure quality index improved by 48 places, bringing Egypt to the 52nd place globally in 2019, compared to the 100th place in 2015/14.

El-Said also referred to the establishment of The Sovereign Fund of Egypt (TSFE) as one of the mechanisms to enhance partnership with the private sector, following that despite the start of the fund’s activity coinciding with challenges and difficult conditions, most notably the repercussions of the Covid-19 pandemic.

The fund succeeded in attracting investors and partners from inside and outside and signing agreements to enter into multiple partnerships, noting that the fund’s investment activity began by concluding many partnerships, including participating in the establishment of the Egyptian National Company for Railway Industries.

El-Said continued talking about the plan developed by the TSFE to re-exploit the assets transferred to it, to maximize their value and return from them, including the Tahrir Complex building and the “Revival of Khedive Cairo” project, as well as the fund’s signing of a partnership agreement with the National Service Projects Organization.

“An alliance agreement was also signed between The Sovereign Fund of Egypt and one of the largest regional financial institutions (EFG Hermes Holding) by signing an agreement to acquire 76% of the shares of the Arab Investment Bank by increasing the bank’s capital to EGP 5bn,” El-Said explained.