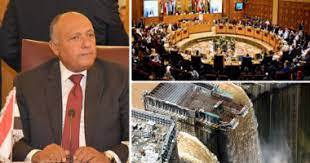 The Arab League has announced that an extraordinary session at the level of Foreign Ministers is scheduled to be held in the Qatari capital, Doha, next Tuesday.

The meeting is set to discuss the latest developments in the Grand Ethiopian Renaissance Dam (GERD) issue.

In a statement on Saturday, Hossam Zaki, Assistant Secretary-General of the League of Arab States, said that the extraordinary meeting will be held at the request of Egypt and Sudan.

Zaki had confirmed in previous statements that the Arab League fully supports the positions of Egypt and Sudan on the controversial Ethiopian dam issue.

He also said that the organisation has no neutrality in this regard, and supports the right of Egypt and Sudan to use River Nile waters.

He added that the Ethiopian position is intransigent and irrational, and leads to provocation and hostility, regardless of any party’s adherence to any mediation.

Zaki said that the Arab League and its missions always affirms the rights of Egypt and Sudan to use waters of the River Nile. This includes the right of the two countries to reach legal and binding understandings and agreements regulating these uses.

He rejected any unilateral move by any party that would harm the current situation, or harm the interests of the downstream countries.

Egypt’s Minister of Foreign Affairs Sameh Shoukry stressed his country’s firm position on the GERD issue during a phone call with Antonio Guterres, Secretary-General of the United Nations (UN).

Shoukry reiterated Egypt’s rejection of the unilateral Ethiopian measures related to filling the dam’s reservoir. This extended to the need to reach a binding legal agreement regarding the rules for filling and operating the dam, which serves the interests of the three countries.

Shoukry also stressed the need for international parties, led by the UN and through its Security Council, to contribute to pushing Ethiopia to engage seriously and with a sincere political will in the negotiations in order to reach the desired agreement.