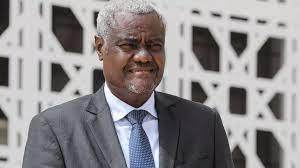 Moussa Faki, Chairperson of the African Union (AU) Commission, will arrive in the Sudanese capital, Khartoum, on Saturday for a two-day visit to discuss the democratic transition in the country.

Faki will be accompanied by: Adewe Bankole, Commissioner for Political Affairs, Peace and Security; and Mohamed Al-Hassan Wad Labbad, Advisor to the Chairperson of the Commission.

During the visit, the delegation will meet the head of the Sovereignty Council of Sudan Abdel Fattah Al-Burhan, his deputy Mohamed Hamdan Dagalo, Prime Minister Abdullah Hamdouk, and Minister of Foreign Affairs Maryam Al-Sadiq Al-Mahdi, according to the Sudan Tribune website.

According to the Sudan News Agency (SUNA), the two sides will discuss the relationship between Sudan and the AU, especially with regard to the process of supporting the democratic transition in Sudan.

The visit will also see discussions on the development of the situation in the country, and the position of implementing the peace agreement signed in South Sudanese capital, Juba, last October. The agreement was signed by the transitional government and the armed movements affiliated with the Sudan Revolutionary Front.

The AU delegation will also hold meetings with some political figures and heads of African diplomatic missions in Khartoum, as well as Peretz Voekler, head of the United Nations Integrated Transition Assistance Mission in Sudan (UNITAMS) mission.

The AU has played a prominent role in reaching a consensus between the Sudanese military and civilian leadership, following the popular revolution that overthrew the rule of ousted President Omar Al-Bashir.

The organisation’s mediation, led by Mauritanian Mohamed El Hassan Ould Labat, resulted in the signing of the constitutional document governing the transitional period and power-sharing between the military and civilian leaders in August 2019.

The AU is also mediating talks between Egypt, Sudan, and Ethiopia regarding the Grand Ethiopian Renaissance Dam (GERD), which Khartoum described last week as being at a “stalemate”.

Faki is also expected to discuss with Sudanese officials the border tension between Khartoum and Addis Ababa, with the aim of reaching a peaceful solution to the conflict between the two countries.

This visit coincides with the Sudanese Government’s decision to strengthen its security and military presence in the country’s southern Al-Fashqa area, located on the border with Ethiopia, to confront potential threats from the Ethiopian side.

Meanwhile, Ethiopia claims that Sudan has occupied its lands, at a time when the region is witnessing a state of military and security tension. The armies of the two countries are on alert on both sides of the border.