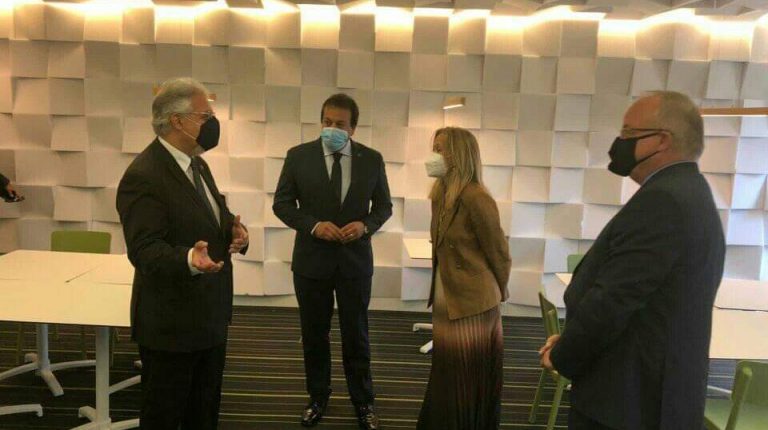 Egypt’s Minister of Higher Education and Scientific Research Khaled Abdel Ghaffar has visited the Catholic University of Portugal, to discuss ways of enhancing cooperation between the universities of both countries.

Abdel Ghaffar met with the university’s President, Isabel Maria de Oliveira, on the sidelines of his visit to Portugal, where he is participating in the activities of the Europe-Africa Space Earth Observation High-Level Forum.

The Ministry of Higher Education and Scientific Research said, on Saturday, that both officials have also discussed establishing a Portuguese partnership with one of Egypt’s new universities. This will see the exchange of academic, scientific, and research experiences between the two universities.

Abdel Ghaffar discussed ways to provide a number of scholarships for Egyptian students, in order to build the scientific capabilities to enhance the scientific research environment.

In a different context, Abdel Ghaffar announced, on Friday, that Egypt is planning to launch two remote sensing satellites, named Nexsat 1 and Misrsat 2, in 2022.

He called for enhanced cooperation between African and European countries, saying, “Building a strong and fair partnership in the space field will be beneficial to all parties and will help stabilise African countries, achieve sustainable development goals (SDGs), and improve life for all residents of the continent.”

Abdel Ghaffar urged the European Union (EU) to mull the establishment of the European-African Space Training Programme in Egypt. He added that the Egyptian Space Agency (ESA) will provide full logistical support for such a programme, which can provide annual training courses and qualifications for African students and researchers.

Cristiano Ronaldo opens hotel in Madrid at cost of €13m