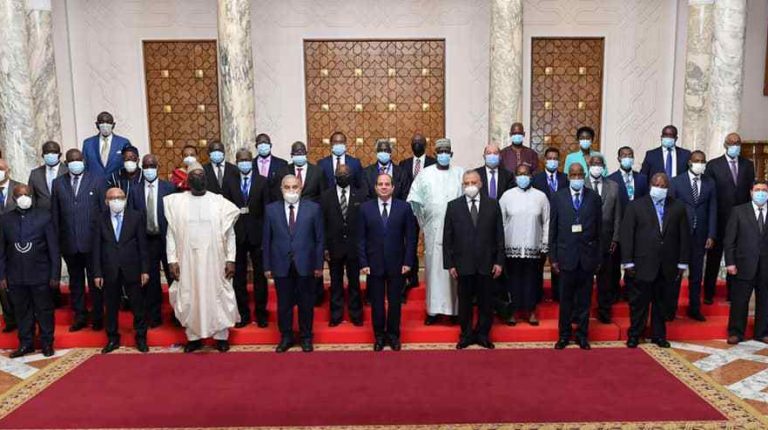 Egypt’s President Abdel Fattah Al-Sisi received in Cairo, on Saturday, the heads of constitutional and supreme courts and constitutional councils from across Africa.

This came as part of their participation in the fifth high-level meeting of heads of African constitutional and supreme courts and constitutional councils, which was organised in Cairo by Egypt’s Supreme Constitutional Court.

During the meeting, the President expressed his appreciation for the important role of constitutional and supreme courts both in Egypt and the continent.

Al-Sisi also expressed Egypt’s keenness on organising the conference periodically to support the role of the judiciary in Africa.

He noted that Africa’s judiciary currently plays an influential role in building a unified and homogeneous legislative environment to deal with international challenges that the continent faces.

The meeting also aimed to enhance cooperation and exchange experiences between African supreme courts regarding constitutional justice, in a way that contributes to establishing justice and democracy, and protecting the rights of citizens.

Moreover, Al-Sisi said that judicial efforts are of particular importance due to traditional development challenges, foremost of which is the phenomenon of terrorism. This is in addition to other challenges of a special nature that developing countries, particularly in African, face following the novel coronavirus (COVID-19) pandemic.

The meeting addressed various issues on the African arena, foremost of which is the fight against terrorism on the continent as a basic necessity as it threatens stability in any country.

Al-Sisi stressed the importance of judicial institutions in confronting terrorism and extremist ideology, whilst developing the necessary legal frameworks to deal with it. This would take into account the devastating impact of terrorism on the state’s capabilities and gains.

He also reviewed Egypt’s vision in recent years to combat terrorism, which was based not only on dealing with the security, intellectual and religious aspects. This vision also sought to pay attention to building and reconstruction, strengthening infrastructure, and improving economic and social conditions as a basic means of combating terrorism.

Said Marai, President of Egypt’s Supreme Constitutional Court, stressed the importance of the support provided by President Al-Sisi to holding the conference, as well as activating cooperation and exchange of experiences between African judicial bodies.