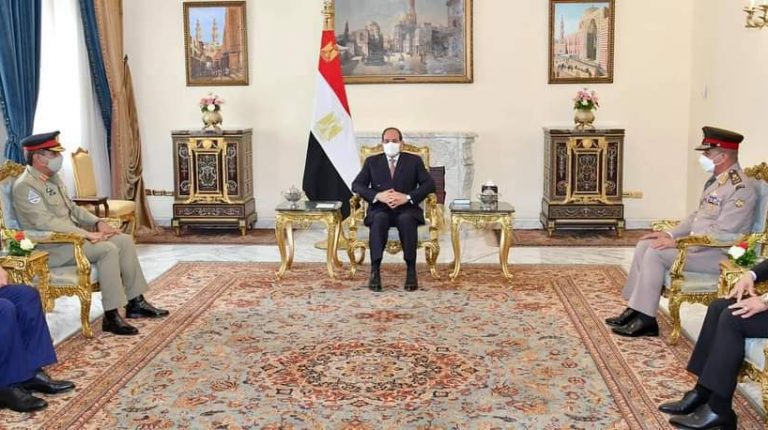 President Abdel Fattah Al-Sisi has asserted Egypt’s aspiration to develop bilateral cooperation with Pakistan, including in the fight against terrorism and extremist ideology.

Al-Sisi received Chief of the Pakistani Army’s Joint Chiefs-of-Staff Committee, Lieutenant-General Nadeem Raza, on Sunday, in the presence of Egypt’s Minister of Defence Mohamed Zaki, and the Pakistani Ambassador in Cairo.

Al-Sisi asserted the importance of exchanging experiences with Pakistan in various fields of common interest.

He explained that, in order, to compact the extremist ideology, it is important to unite joint efforts to clarify and disseminate the principles of the religion, supporting acceptance of others, and peaceful coexistence. Al-Sisi also affirmed Egypt’s appreciation for Pakistan’s role as a pivotal country in the region.

Raza conveyed the greetings of the Pakistani President and Prime Minister, stressing the depth of the relations between the two countries and their people.

He confirmed his country’s aspiration to open new horizons for fruitful cooperation with Egypt, stressing that Egypt’s stability is a pillar for the Middle East region’s stability, and that of the Islamic world as a whole.

He also hailed the conscious steps that Egypt has taken in the region, asserting that the country is a good example of balanced and rational policy in the region. He also asserted Egypt’s important role in achieving a cease-fire between Palestine and Israel, and its initiative to start a reconstruction programme in Gaza.

The meeting also tackled ways to enhance bilateral cooperation between Egypt and Pakistan, especially in the security and military fields.

The cooperation will include mutual visits of military leaders, in addition to holding a joint defence committee, and cooperation in the field of defence and military industries. Both Egyptian and Pakistani military forces will also hold joint training programmes.

The meeting also discussed the latest developments in the Middle East and the Islamic world, in which both officials asserted the importance of continuing intensive coordination and advancing joint efforts. These are aimed at maintaining the regional and international peace and combat terrorism and extremist ideologies.