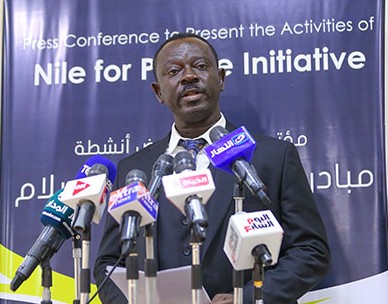 The Nile for Peace Initiative called for reaching a legally-binding deal for the Nile dam dispute between Egypt, Sudan and Ethiopia.

This came during a Sunday press conference, in which the initiative members recommended that the three countries should agree over the Grand Ethiopian Renaissance Dam’s (GERD) filing and operation policies.
The conference was organized by Maat for Peace, Development and Human Rights, in its capacity as a member of the African initiative, which was launched in the Ugandan capital, Kampala, in April 2021.

Kofi Kankam, Chair of the Major NGO Group in Africa, and Vice-Chair of the African Mechanism of Major Governmental Organizations, said that the initiative held a number of meetings and high-level visits, topped by meetings with the Egyptian Minister of Irrigation and members of the House of Representatives, as well as a number of African embassies in Egypt led by the Ethiopian ambassador in Cairo, to present alternative solutions to the initiative and the African views that recommend postponing the second filling of the GERD, until a legally-binding agreement guaranteeing the rights of the three peoples is reached between the three countries.
As to the initiative’s future steps, Kankam, the head of the initiative’s delegation to Egypt, declared that a number of meetings will be held with decision-makers and actors in the African Union, the European Union, the United States of America and some United Nations bodies, as a mobilization of international solidarity, to introduce them to the initiative and hear their point of view, and to stress the need for the development of a legally-binding framework that preserves the rights of all states.
Ayman Okeil, president of Maat for Peace, Development and Human Rights, stated that the initiative is not aimed at impeding the development process in Ethiopia, as long as this development is not detrimental to the rights of the peoples of Egypt and Sudan. Okeil added that Ethiopia, for its part, must stop the second filling of the GERD as a demonstration of goodwill towards the peoples of Egypt and Sudan. While Egypt, Sudan, and the international community must support Ethiopia in its developmental process, especially the energy projects, and compensate it in case of any damage caused by the delay.
Hajar Monsif, Head of the African Affairs and Sustainable Development Unit at Maat, pointed out that civil society organizations have played a major role in spreading the initiative, let alone advocating and mobilizing towards just solutions. Monsif added that dozens of awareness-raising activities on the principles of the document were organized. These principles call for reaching a legally-binding agreement that preserves the rights of the three peoples, and guarantee’s Ethiopia’s right for development.
Hanan Muddathir, Founder Representative and President of the Environmental Initiative Organization for Sustainable Development (EnvI) in Sudan, addressed the shortcomings in the negotiation process over the past ten years, especially the lack of involvement of civil society organizations in the issue. Muddathir encouraged the three countries to return to the negotiating table as soon as possible, and to seek solutions in the framework of international treaties and covenants, stressing that peoples’ lives are not negotiable.
It is worth noting that 15 members of the initiative from various African countries has participated in the conference, through online recorded speeches. All participants stressed the rights of the three countries to the Nile waters, and affirmed the critical need to reach a legally-binding agreement that preserves these rights.