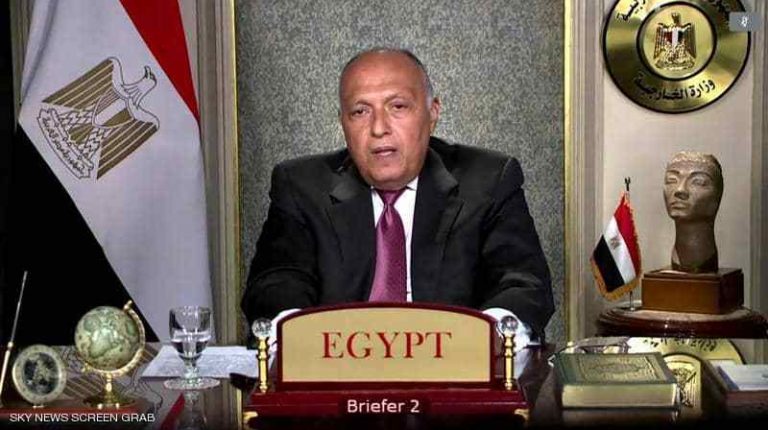 Egypt’s Minister of Foreign Affairs Sameh Shoukry has accused Ethiopia of obstructing efforts to reach an agreement on the latter’s controversial dam.

Shoukry also said that Addis Ababa has no real political will to reach an agreement with the two downstream countries, namely Egypt and Sudan.

“Egypt firmly rejects conducting the second filling before reaching an agreement, and in the event that it occurs, there will be political measures that protect the interests of the downstream countries,” the minister said, “Both Egypt and Sudan will resort to all available means to preserve their water interest.”

In televised statements on Saturday evening, Shoukry said that Ethiopia violated the 2015 Declaration of Principles, which stressed the need for consensus between the three countries on the Grand Ethiopian Renaissance Dam (GERD).

The minister added that talking about Ethiopia’s sale of water is inconsistent with the rules of international law and out of context. He noted that Cairo is participating in the negotiations about the construction of Ethiopia’s dam, and there is no negotiation over water shares.

He stressed that the negotiations are related to the filling and operation of the dam, or reaching a legally binding agreement between the three countries, and the talks do not go beyond this scope.

Shoukry said that all options are available in the Ethiopian dam crisis after evaluating the developments of the situation and in coordination with Sudan.

He explained that Egyptian state institutions monitor and deal with every action taken by Ethiopia with precision and consideration for the interest of the Egyptian people.

An urgent meeting of the Arab region’s Ministers of Foreign Affairs will be held, on Tuesday, in the Qatari capital, Doha, in efforts to address the GERD issue upon Cairo and Khartoum’s request.

Meanwhile, Egypt’s Ministry of Foreign Affairs sent, on Friday evening, a letter to the President of the UN Security Council to explain the latest developments in the GERD issue. The letter showed Egypt’s objection to what Ethiopia announced about its intention to continue filling the Dam during the next flood season.