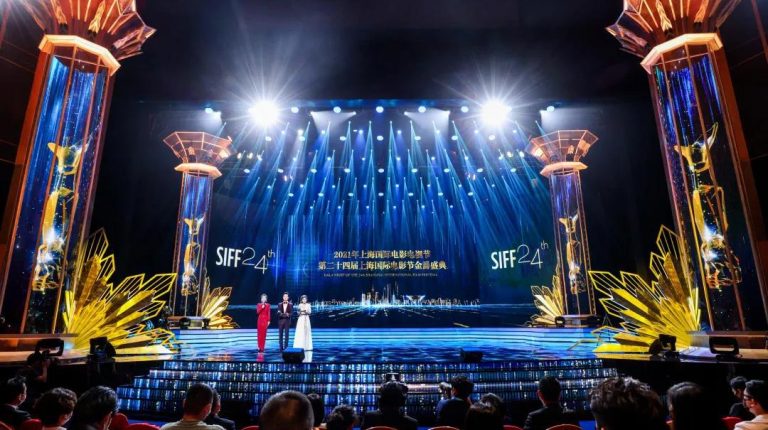 The 24th Shanghai International Film Festival (SIFF) kicked off, on Saturday, at the Shanghai Grand Theatre with the Golden Goblet Ceremony and the Red Carpet.

This edition of the SIFF, which will last for 10 days, bears the mission of creating a genuine celebrating ambiance for the centenary of the founding of the Communist Party of China. It also seeks to promote the high-quality development of Chinese films, and meet the cultural needs of the people, according to a press release.

An array of excellent Chinese and foreign films will add the glamour of film art to Shanghai, and the filmmakers, in their unique ways, will pay tribute to the new era, and set sail on the new journey.

At the Golden Goblet Ceremony, Yan Xiaoming, Member of the Leading Party Group and Deputy Director of China Media Group, delivered a speech and announced the opening of the festival.

Zhou Huilin, Member of the Standing Committee and Head of the Publicity Department at the Shanghai Municipal Committee of the Communist Party of China, also delivered a speech. Other attendees at the event included: Chen Tong, Deputy Mayor of Shanghai; Meng Xianglin, Executive Deputy Director of China Film Administration; and other leaders.

“Although we are at different ages and have different experiences, as filmmakers, we have the same wish, and that is to make more fine films, to live up to the expectation of the audience, and to pay tribute to the great era,” they jointly said.

Later, the Juries for each category of the Golden Goblet Awards appeared collectively. Huang Jianxin, Jury President for the main competition, emotionally recalled attending the various editions of the SIFF since its birth in 1993.

Facing the upcoming judging work, Jianxin expressed his expectation that the juries can speak freely and fully exchange ideas, adding, “We will definitely give each entry the greatest respect and the most objective evaluation.”

The 24th SIFF, taking place under the theme of the centenary of the Communist Party of China’s founding, is dedicated to creating a genuine celebratory ambience.

Among these celebrations, there is a special category, titled A Hundred-Year Journey – Red Film Art, which will screen 12 new and old films including the films Song of Youth, Heroic Sons and Daughters, The Wandering Earth, Sacrifice, Days and Nights in Wuhan, and Liuqing.

These will revisit the Chinese people’s great journey of revolution, construction, reform, and revival, led by the Communist Party of China. The category will also allow the audience an understanding of the party’s original aspiration, embodied by the heroes.

SIFForum will feature an exchange of ideas, presentation of concepts, and sharing of experiences. It will encourage attendees to be inspired by each other and reach a consensus, boosting the confidence and responsibility of filmmakers to explore new opportunities amidst challenges.

Other events that will be held as part of the festival are: the China Film Industry Summit Forum: Make True the Dream of a Century and Set Sail on a New Journey; and themed forums such as “Marketing Strategy of Mainstream Cinema”, “Virtuality And Reality – New Changes in Film Production”, and “Yangtze River Delta Film Cooperation Forum”.

Chinese and foreign film masters will also exchange ideas on film development and the experience of film creation with industry colleagues in the MasterClass, which will take place through online and offline dialogues.

At the SIFF Market held at the Shanghai International Exhibition Center, the film poster exhibition themed Red Film Art · Tribute to the 100 Years’ History of the CPC will showcase the major works celebrating the centenary of the Communist Party of China’s founding.

It will also feature the key works along the same theme, created by film institutions from three provinces and one city in the Yangtze River Delta region this year. These film works, exhibited in the form of huge posters, are clear in subject, rich in themes, vivid in storytelling, and diverse in contents.

Echoing the poster exhibition, the crews of The Battle at Lake Changjin, Sniper, Chinese Doctors, and other works appeared on the opening red carpet.

The 24th SIFF is a film event with extensive international influence, held under the guidance of the relevant authorities. This year’s event has adopted a series of more sophisticated and complete control measures against the novel coronavirus (COVID-19) pandemic, to ensure the safe and orderly running of offline activities.

At present, the attendance rate at cinemas remains at 75%, and there are also many pandemic control measures at cinemas, including temperature measurement, information registration, disinfection, and cleaning.

At the entrances to the SIFForum and the SIFF Market, integrated equipment combining health code checks, identification, and temperature measurements have been placed. This is to ensure that there are no hidden dangers, while registering the information for pandemic control.

With sound and refined prevention measures, the main sections of this year’s SIFF, such as selections, panorama, forums, and markets, have been fully presented. The innovative model of safe festivals has also won the trust of the global film industry.

Among the more than 400 films that will be screened at the 24th SIFF, 73 are world premieres, 42 international premieres, 89 Asian premieres, and 99 Chinese premieres. In addition to the A Hundred-Year Journey · Red Film Art category, these films will be divided into 16 categories, including Premiere Ceremony, Tribute to Masters, SIFF Classics, and Multiple Perspectives, and will be shown in theatres.

In 2015, SIFF launched SIFF World Express. As one of the 15 non-specialised competition international film festivals recognised by the International Federation of Film Producers Associations (FIAPF), it carefully selected the Chinese film candidates for competition and Panorama.

The SIFF has been trying to improve the value of the Golden Goblet section, and is actively seeking new breakthroughs. Based on the festival’s long-term cooperation with the Cannes Film Market, this year’s two major international category A film festivals reached a substantive new cooperation on SIFF YOUNG X.

This project, directed by the Shanghai Film Bureau, and jointly initiated by SIFF and the Cannes Film Market, was announced at the SIFForum on 12 June after 18 months of deliberation and steady progress.

It will take full advantage of the platform influence of SIFF and the Cannes film Market to provide young Chinese filmmakers with broader development space and smoother growth channels.

The dual-platform mechanism featuring doubled function and mutual empowerment online and offline will help exhibitors at home and abroad to effectively improve the communication efficiency.