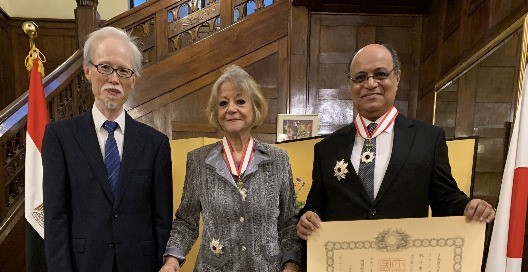 The Embassy of Japan in Egypt has announced the conferment of the Order of the Rising Sun Gold and Silver Stars to two Egyptians.

The award was given to: Faiza Abou El-Naga, a special adviser to Egyptian President Abdel-Fattah Al-Sisi on national security affairs; and Hisham El-Zimaity, former Ambassador of Egypt to Japan.

The award comes in appreciation of the great achievements and contributions they have made to strengthening bilateral relations between Japan and Egypt, and strengthening friendship and goodwill between the two countries.

This is the first time in the award’s history that two people have been crowned together at the same time.

Both Abou El-Naga and El-Zimaity, through their positions, have undertaken long-term efforts towards the development and strengthening of Japanese-Egyptian relations. They have also achieved outstanding results in the development of the current bilateral relations and the bonds of friendship between the two countries.

Many of these contributions are embodied in various fields of bilateral cooperation that are currently ongoing, such as the Grand Egyptian Museum (GEM), and the Egyptian-Japanese University of Science and Technology (E-JUST). These are seen as symbols of cooperation between Japan and Egypt.

During her long-term tenure as Minister of International Cooperation starting in 2001, Abou El-Naga significantly expanded the base of bilateral cooperation, including the signing of 38 Mutual Memoranda on Economic Cooperation between Japan and Egypt.

In particular, during her tenure at the ministry, Abou El-Naga undertook the signing of a memorandum of cooperation between the Japanese and Egyptian governments on the plan for constructing the GEM.

This also great contributions towards the establishment of E-JUST, since it was an idea until the memorandum’s signing.

After that, she also held several important positions such as Counsellor to the President, Chair of the Board of Trustees at E-JUST, and Chair of the Steering Committee of the Egypt-Japan Educational Partnership (EJEP). She continues to cooperate for the development of Egyptian-Japanese relations from various locations.

For his part, El-Zimaity has served as Egypt’s Ambassador to Japan for over three years starting from 2011, and has strived to enhance mutual understanding between Japan and Egypt since taking office. He has also contributed to maintaining and developing friendly relations between the two countries.

In January 2015, during his tenure as ambassador, he contributed to the Japanese Prime Minister’s first visit to Egypt after President Abdel Fattah Al-Sisi’s assumption of his role.

The visit was the first by a Japanese Prime minister after an absence of seven years, and gave great impetus to the development of bilateral relations between the two countries.

After returning to Egypt, El-Zimaity continued his contributions to the development of Egyptian-Japanese cooperation, including in education. He is still actively cooperating to create the future of bilateral relations between the two countries, including through his work as General Coordinator of the Joint Committee for the GEM.

During the award ceremony, Abou El-Naga said that holding several positions as the first woman in Egypt has been a source of pride for her, but that she is especially proud of this new honour.

She also stressed the importance of continuing to work with Japan in several fields, foremost of which is the field of education, citing the Japanese proverb: “Continuity is strength, and perseverance is the root of success”.

For his part, El-Zimaity said that the period in 2011 when he took up his role as Egypt’s Ambassador to Japan was very difficult.

He managed to overcome many difficulties, however, with the help of his Japanese friends, by emphasising that the priority is the stability of Egypt first, and doing his best to develop Japanese-Egyptian relations.

El-Zimaity also expressed his happiness at receiving the award with the attendees, including his family members.