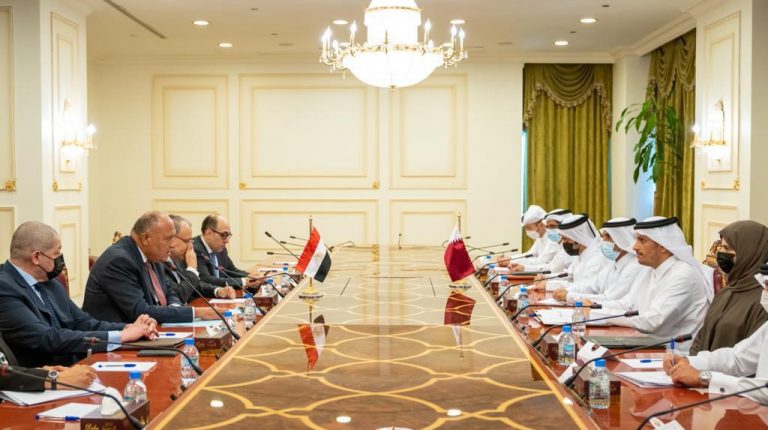 Ahmed Hafez, Spokesperson for Egypt’s Ministry of Foreign Affairs, said that the two ministers expressed satisfaction with the positive developments in Egyptian-Qatari relations following the signing of the AlUla Statement on 5 January.

During the meeting, which took place in the presence of delegations from the two countries, the two ministers agreed on the importance of taking the necessary steps to build on previous achievements.

This would occur by reactivating the various bilateral cooperation frameworks and continuing to hold the existing follow-up mechanisms. It would take place as part of efforts to settle all outstanding issues between the two countries during the coming period.

It was also agreed to advance aspects of bilateral cooperation in priority sectors to achieve the interests of the two countries and brotherly peoples.

Hafez added that the meeting dealt with the most prominent current challenges facing the Arab countries and the regional arena.

The meeting also stressed the need to intensify coordination and consultation, as well as strengthening joint action mechanisms. This would take place in a way that contributes to achieving the aspirations of the Arab peoples towards enhancing security and stability, whilst advancing development.

The consultative Arab League meeting scheduled for Tuesday was also discussed, which will discuss the most prominent regional issues and ways to deal with external interventions harmful to Arab national security.

The two ministers also highlighted the importance of stressing Arab solidarity with Egypt and Sudan during the extraordinary session at the level of foreign ministers scheduled to be held on the issue of the Grand Ethiopian Renaissance Dam.

The talks also dealt with discussing the visions and positions of the two countries on the most important issues of common concern at the regional and international levels.

The two sides stressed the importance of coordinating regional efforts to reach solutions that guarantee the security and stability of the region, and encourage joint cooperation.

For his part, the Qatari Foreign Minister noted the positive developments in the relations between the two countries.

Sheikh Mohammed stressed that these developments are in the interest of enhancing the security and stability of the region.

He reiterated Qatar’s thanks to Egypt for its efforts that contributed to the recent ceasefire in the Gaza Strip, and stressed the leading role the Egyptian community has played in the Qatari public and private sectors.