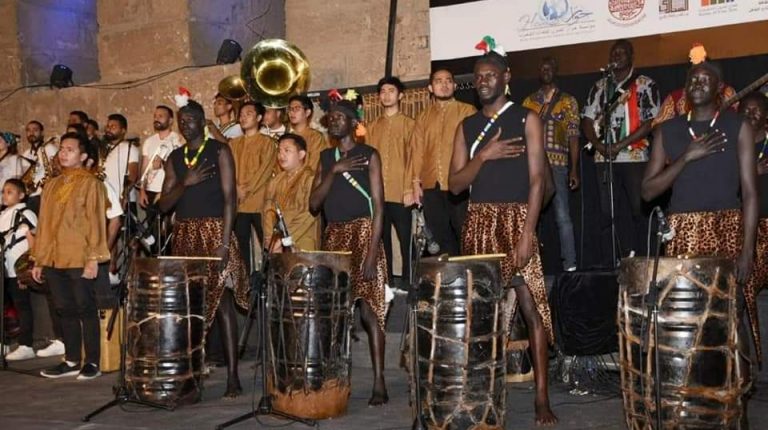 Egypt’s Minister of Culture Inas Abdel Dayem inaugurated, on Saturday, the eighth International Festival of Drums and Traditional Arts at the Bir Youssef Theater in Cairo’s Citadel of Salah Al-Din.

Titled “Dialogue of Drums for Peace”, the festival will run until 18 June, and will feature Colombia and South Sudan as guests of honour.

Aside from several workshops that will be held on the sidelines of the festival, some foreign communities living in Egypt will also take part in the festival to present their heritage.

Furthermore, the Folklore Arts House will participate in the event through four troupes, namely the Reda Troupe, the National Folklore Troupe, the Folk Music Troupe, and the Circus Troupe.

The festival was founded in 2012 by Intesar Abdel Fattah, an expert in culture and arts with the Ministry of Culture and General Manager of Al-Ghouri Arts Center.

Abdel Fattah is responsible for the establishment of several arts groups, such as the Egyptian Arts Troupe.

Abdel Dayem said that the festival provides an opportunity for civilised dialogue on heritage between people.

She added that holding the festival helps assert the importance of culture and arts in creating peace and achieving coexistence among humans.

As part of the festival’s activities, the minister inspected an exhibition of Egyptian traditional crafts and handicrafts from various regions. The opening ceremony included many artistic activities of the participating troupes.

During the opening ceremony, the South Korean Ambassador in Cairo, Hong Jin-wook, played the saxophone and dedicated the song to Egypt and its people.

Opinion| The Future of Audio Streaming