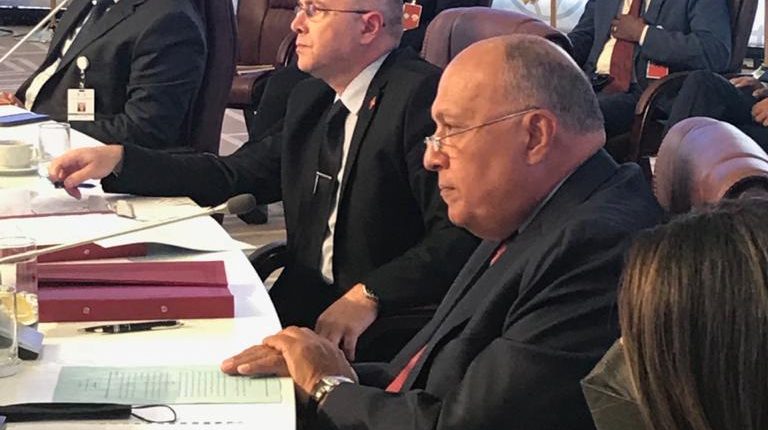 Egypt’s Minister of Foreign Affairs Sameh Shoukry stressed, on Tuesday, that Ethiopia’s insistence on the second filling of the Grand Ethiopian Renaissance Dam (GERD) without an agreement violates the rules of international law.

Shoukry’s remarks came during his speech at the extraordinary session of the Arab League Council, which took place at the ministerial level to discuss the issue of the controversial Ethiopian dam.

The minister briefed his Arab counterparts on Egypt’s efforts and sincere will to reach a binding legal agreement that takes into account the interests of the three countries.

He pointed out that, for 10 years, Egypt and Sudan had engaged in strenuous negotiations with the Ethiopian side, without achieving any tangible progress.

The minister also said that in these negotiations, Egypt demonstrated its goodwill to achieve a binding and just legal agreement. This would guarantee Ethiopia its right to development, without encroaching on the rights of the two downstream countries, and in a manner that does not cause any serious harm to either of them.

Shoukry stressed that Ethiopia only wishes to impose its vision on others, whilst ignoring all charters and agreements that govern international rivers. He noted that the country is also seeking to impose a new reality in which the upstream countries control the downstream countries.

He said that Egypt does not accept this matter, because the River Nile is a joint property, for the countries of the source, as well as for downstream countries. He added that it is not permissible for anyone to change these stable rules.

He pointed out that the failure of these tours is not due to South Africa or the Democratic Republic of the Congo (DRC), but that Ethiopia is to blame.

The Ethiopian intransigence is represented in its insistence on continuing to fill the reservoir of this huge dam without an agreement with the two downstream countries, namely Egypt and Sudan.

This represents a serious violation of the Declaration of Principles Agreement concluded between the three countries in 2015, he said.

Shoukry also said that Egypt is determined to exhaust all diplomatic solutions, and asks the Arab brothers to support the just Egyptian-Sudanese endeavour.

The minister said that Egypt had submitted this existential issue to the Arab League’s Ministerial Council, in view of Arab national security being affected by this issue. Egypt’s stance comes with the view to protect the capabilities of national security.

He said that Egyptian and Sudanese water security is closely linked to Arab national security, and stressed the existence of clear Arab solidarity and a unified position. This calls for a need to set a time frame for the negotiating process until a balanced agreement is reached.

It is not acceptable for negotiations to continue indefinitely, as we are aware of the Ethiopian intentions that empty any negotiation of its content, he added.

Shoukry stressed that the Ethiopian side is deliberately imposing its vision and ignoring Arab positions. As a result, Arab support for Egypt and Sudan in their just stance acquires double importance under these circumstances.