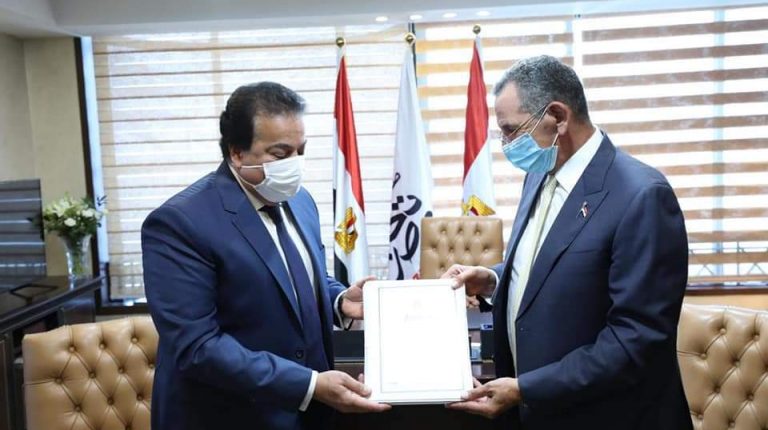 Egypt’s Minister of Higher Education and Scientific Research Khaled Abdel Ghaffar has handed over an EGP 57m grant from Egyptian universities and private institutions as a contribution in the Presidential Initiative for the Reconstruction of Gaza.

Tamer Abdel-Fattah, CEO of Tahya Misr Fund, received the minister for a meeting on Monday, during which Abdel Ghaffar handed over the funds.

The minister hailed the presidential initiative to help Gaza, stressing the immediate response of Egypt’s universities and private institutes to the initiative, in order to support the Palestinian people.

Meanwhile, Presidential Advisor for Financial Affairs Mohamed Amin lauded the contribution of the Egyptian educational entities. He said that President Abdel Fattah Al-Sisi’s invitation to participate in the efforts to rebuild Gaza received great interest from many Egyptian companies. These have participated in the relief convoys organised by the Tahy Misr Fund to provide humanitarian aid for Palestinians.

It is noteworthy that the fund allocated the bank account 037037 at all Egyptian banks, to receive contributions from inside and outside Egypt for the reconstruction of the Gaza Strip. The donations received through the account would also go towards providing living and medical supplies for Palestinians.

Last week, Egypt held the Cairo Construction Hub event, with a focus on rebuilding the war-torn Gaza Strip. The forum featured a series of events specialising in the discussions of urban development, construction, engineering, architecture, and building materials producers.

Meanwhile, earlier in May, Al-Sisi pledged $500m for the reconstruction of the Gaza Strip.

Between 10 and 21 May, Gaza suffered massive damage to its buildings and infrastructure from Israeli aerial bombardments which took place over the 11 days.