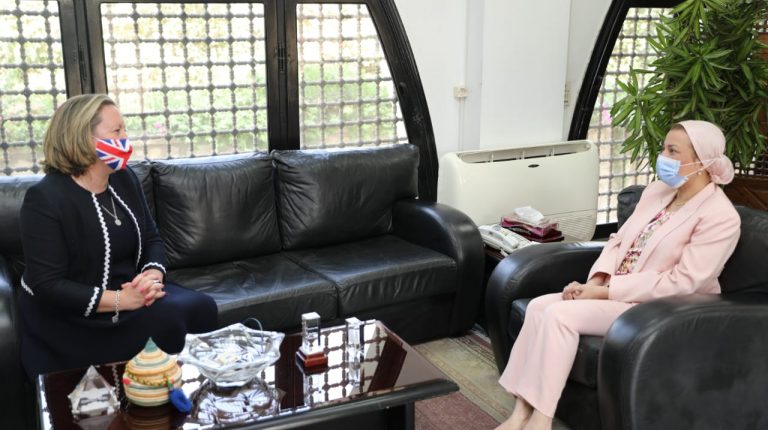 The meeting addressed the preparations for the upcoming COP26 conference, which will take place next November in Glasgow, and possible ways for the UK to support Egypt in increasing its climate ambitions.

During the meeting, Trevelyan called on Egypt to use its position as a regional influencer to encourage other countries to adhere to the four recently announced COP26 goals, namely; adaptation; mitigation of climate change; finance; and cooperation.

The two parties also discussed ways to strengthen the strong partnership between the UK and Egypt in the field of adaptation and address climate change. This was in addition to discussions on the priorities of the Adaptation Action Alliance (AAC), which is co-led by both countries, for the next six months before COP26.

Fouad said that measures to adapt to the effects of climate change are a priority for developing countries and Africa. This includes highlighting the importance of preserving the environment, and measures to confront and adapt to changes in natural resources.

This calls for more discussions to reach solutions to nature and search for success stories that help Egypt on achieving its goals.

The initiative was launched during the opening of the COP 14 Biodiversity Conference, chaired by Egypt in 2018.

During the meeting, Trevelyan announced that the British Egyptian Business Association (BEBA) and the Egyptian British Chamber of Commerce have joined the Race To Zero campaign. This represents the largest ever alliance of companies, cities and other actors, to commit to achieving net zero emissions by 2050.