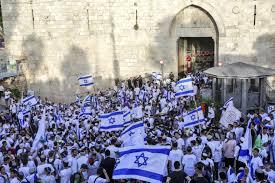 The Arab Parliament has warned of the danger of new clashes in Jerusalem and a region-wide explosion in the situation, if Israel insists on organising what it calls the “flag march”.

The event is set to take place on Tuesday around the Al-Aqsa Mosque, which is already a flashpoint between the Palestinians and Israelis.

Adel bin Abdulrahman Al-Asoumi, President of the Arab Parliament, warned of the great danger posed by the violation of religious sanctities in occupied Jerusalem. He also pointed to the provocation it represents to the feelings of millions of Muslims and Christians around the world.

Al-Asoumi confirmed, in a statement on Monday, that this provocative step will worsen the situation again.

It will also undermine efforts to stabilise the region, he added, following the devastation caused by Israel’s recent brutal aggression against the Palestinians in the occupied territories.

Al-Asoumi called on the international community to pressure Israel into halting its provocative policies, which will only bring more violence and destruction to the region.

For its part, the Palestinian Ministry of Foreign Affairs said that “the flag march that the extreme right intends to organise on Tuesday, is a direct threat to the efforts made to stop the aggression against the Palestinian people”.

The ministry warned, on Monday, against carrying out this provocative march, with its risks and consequences on the efforts made to consolidate the truce, stop the aggression, and efforts to revive the peace process.

It considers that this is an extension of the continuous aggression of the occupation forces against the holy city, its sanctities, and its citizens, and serves as an integral part of the Judaisation of occupied Jerusalem.