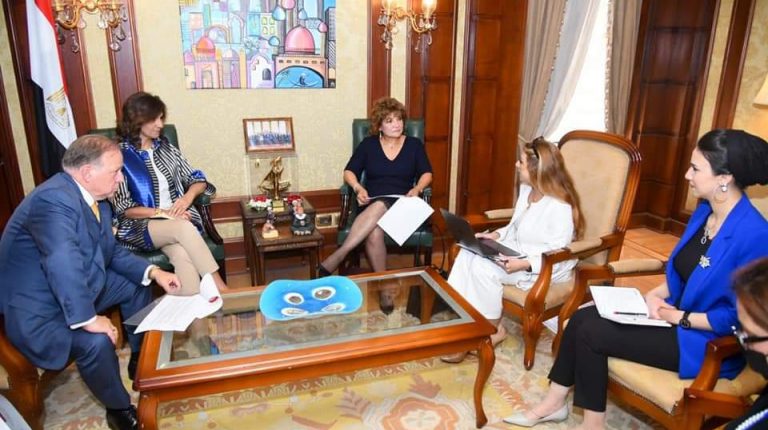 Laila Pence, who tops the Forbes list as one of the foremost wealth management advisors in the US, has announced her participation in Egypt’s presidential “Decent Life” initiative.

Minister of Emigration and Egyptian Expatriates Affairs Nabila Makram received Pence and her husband, businessman Dryden Pence, as well as Aya Omar, Chairperson of the Board of Trustees at the Decent Life Foundation.

The meeting discussed the arrangements for launching an effective campaign for donations from Egyptians living in the US, which would support the “Decent Life” and “Lifeboats” initiatives. The former initiative aims to develop the Egyptian countryside, whilst the latter and addresses the illegal immigration issue.

Makram said that her ministry is keen to address illegal immigration, and highlighted the need to combine the efforts of the Egyptian Government and civil society institutions in supporting local communities. This has seen efforts to improve the lives of Egyptian citizens and their communities.

Pence expressed her gratitude for cooperating with the “Decent Life” initiative, asserting that Egyptians in the US will spare no effort in supporting their homeland, and to support the neediest areas in Egypt.

Pence has almost 40 years of experience in her field, and her cash flow and focused investing has provided her with valuable knowledge needed as a wealth manager.

Last week, the Ministry of Emigration and Egyptian Expatriates Affairs signed a cooperation protocol with the Decent Life Foundation to unify efforts to serve Egyptian citizens in those governorates exporting the highest numbers of illegal immigrants.

The “Decent Life” initiative, which was launched by President Abdel Fattah Al-Sisi in 2019, aims to provide a decent life for the most vulnerable groups nationwide over 2019. It further contributes to enhancing the quality of daily public services provided to citizens, with an eye to inhabitants of rural areas.