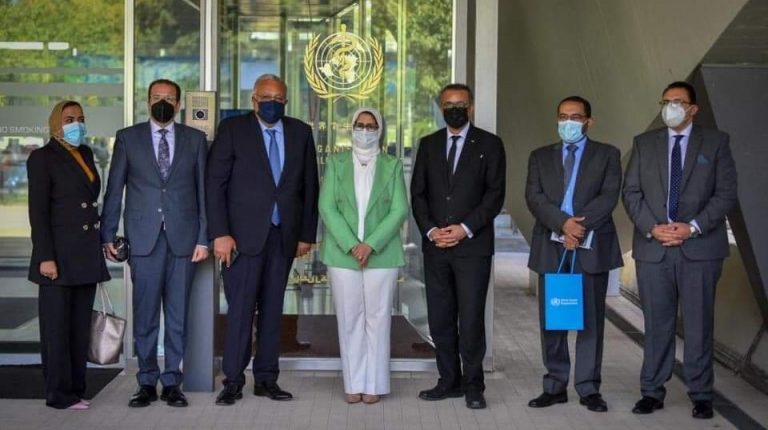 Egypt’s Minister of Health and Population Hala Zayed met, on Wednesday, with the Director-General of the World Health Organization (WHO) Tedros Adhanom, to discuss approval for a domestically produced vaccine against the novel coronavirus (COVID-19).

During the meeting, Zayed reviewed the Egyptian efforts to manufacture the COVID-19 vaccine, through the contract with the Chinese company Sinovac.

The meeting came during Zayed’s visit to the Swiss capital, Geneva, to discuss and enhance ways of cooperation in the health field with a number of international organisations.

She expressed Egypt’s desire for the WHO’s support for a COVID-19 vaccine produced in the country.

Egypt is currently manufacturing 2 million doses of the Sinovac vaccine through production lines belonging to Egyptian pharmaceutical company VACSERA. This is part of a wider deal with the Chinese company to produce a total of 40 million doses by the end of 2021 in Egypt.

Zayed applauded the WHO’s efforts to support the health system in Egypt, adding that the WHO’s humanity had saved the lives of many people in the world during the COVID-19 epidemic.

The two sides discussed the international treaty on pandemic prevention and preparedness which will be drafted during the coming months.

The treaty will support international efforts to reinforce global health security, in particular on preparedness and response to health emergencies, in light of lessons learnt from the pandemic.

Zayed has also reviewed all the efforts made by her ministry to keep Egypt free of polio. She asserted that in 2021, two campaigns were launched to vaccinate children under the age of five after Egypt obtained 38 million doses provided by the WHO and the United Nations Children’s Fund (UNICEF).

Meanwhile, Adhanom praised the efficiency and good management of the health system in Egypt, expressing his appreciation for the country’s efforts in supporting the draft of the international treaty on pandemic prevention.

He asserted the positive impact that this agreement will achieve in supporting health systems and controlling epidemics as they emerge.

On Tuesday, Zayed announced that Egypt will receive 1.9 million doses of the AstraZenca vaccine within days, a new batch of a wider package comprising 40 million doses agreed upon with the global COVAX facility by the end of last year.

She added that Egypt is well prepared to cooperate with COVAX and vaccine manufacturers to help produce the doses via the Egyptian firms to speed up the supply of these vaccines worldwide.

The minister’s remarks were made after a meeting in Geneva with Aurélia Nguyen, the managing director of the Office of the COVAX Facility.

Egypt to start production of Sinovac vaccine next week: Madbouly