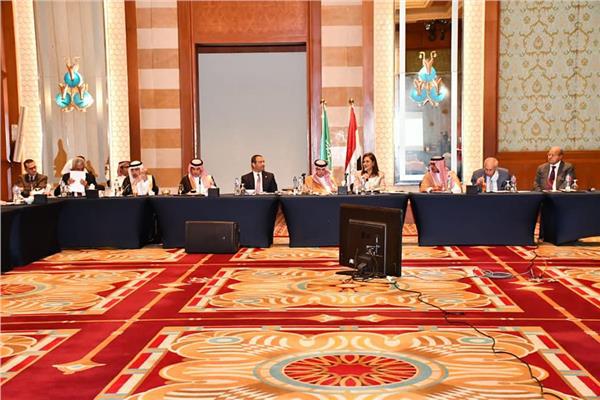 Hala El-Said, Egypt’s Minister of Planning and Economic Development and Chairperson of The Sovereign Fund of Egypt (TSFE), has held a meeting with Saudi Minister of Commerce Majid bin Abdullah Al Qasabi and his accompanying delegation.

The meeting took place in the presence of: Nevine Gamea, Egypt’s Minister of Trade and Industry; Bandar bin Mohammed Al-Amri, Chairperson of the Saudi-Egyptian Business Council; Abdel Hamid Abu Moussa, Head of the Egyptian side to the Egyptian-Saudi Business Council; TSFE CEO Ayman Soliman; and investors from both sides.

El-Said added that the volume of non-oil trade exchange between Egypt and Saudi Arabia exceeded $4.4bn in 2020, pointing out that the Kingdom is the top Arab investor in Egypt.

She said that Egyptian exports to the Saudi market have achieved significant growth in 2020, recording $2.6bn, compared to $2.3bn in 2019, an increase of 13%, according to data from the Egyptian-Saudi Business Council.

The minister reviewed the most prominent opportunities and areas for developing relations with leading private sector companies in the two countries, and the mechanisms for converting obstacles into investment opportunities in light of the coronavirus pandemic.

“This is especially as several factors support the growth of these relations, such as the support and momentum of the political and supporting institutional frameworks, represented by the Egyptian-Saudi Joint Ministerial Committee and the Saudi-Egyptian Business Council,” she said.

El-Said added that Egypt is keen to develop relations, noting that the legislative framework supporting the partnership between the public and private sectors has received the attention of the state.

“Institutional reforms aim to simplify the procedures for setting up projects and encourage the private sector and local and foreign investment, within the framework of the national economic and social reform programme,” she confirmed.

Regarding Egypt’s efforts to improve infrastructure to stimulate the private sector, El-Said indicated that in recent years several major infrastructure development projects have been implemented. Furthermore, she noted that TSFE was established to mobilise joint financing for development efforts and strengthen partnership with the private sector.

El-Said praised the Saudi-Egyptian Business Council, which, since its establishment in 1989, has become a distinguished platform. It includes the business communities of the two countries, and aims to discuss ways to enhance cooperation in various fields, especially the commercial and investment fields.

She stressed the importance of the council’s role in improving the climate of cooperation and overcoming the obstacles encountered by both countries. She also noted that it encourages an increase in exports through communication and exchange of information on the needs of goods and services, and the dissemination of information on available investment, trade and export opportunities.

El-Said also praised the results of the joint meeting of the Saudi-Egyptian Business Council in Cairo, foremost of which is the agreement on the need to maximise Saudi participation in major Egyptian projects.

This also includes Saudi Arabia’s efforts to enter African markets and free trade zones available to Egypt, and moving towards tripartite cooperation for joint projects in Africa. This is especially in the fields of infrastructure, agriculture, joint manufacturing, logistics, and maximising joint benefits from African and European Free Trade Agreements.

For his part, Soliman showcased the most important projects and investment opportunities that the fund has begun to realise.