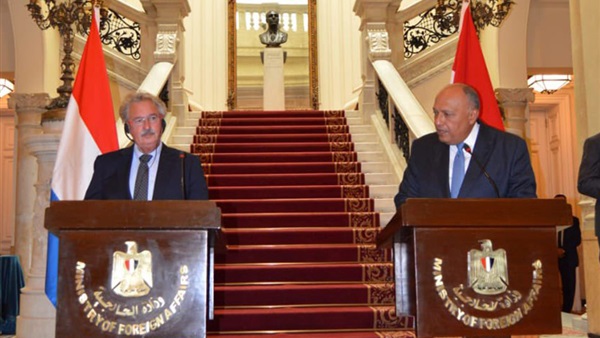 Egypt’s Minister of Foreign Affairs Sameh Shoukry has said that there is a European understanding of the Grand Ethiopian Renaissance Dam (GERD) issue, as there have been successful European experiences to manage water resources.

Cairo has proposed that Ethiopia draw inspiration from the European experience on river and dam issues, but the Ethiopian side is intransigent, he said.

During the press conference, Shoukry said that the ministerial statement issued by the Arab League during the Doha meeting supported the Egyptian and Sudanese positions relating to the dam.

Shoukry pointed out that the Ethiopian side does not have the political will to reach an agreement. He also said that Ethiopia retracted from signing the agreement reached during the Washington meetings on the GERD Dam.

The minister said that the talks with Asselborn dealt with bilateral relations and the common ambition to consolidate and advance them, especially in the field of economics.

It also touched on issues of common interest, foremost of which is the situation in the occupied territories, the situation in Libya, and the latest developments regarding the GERD Dam issue.

Shoukry stressed the existence of an identical vision on the Israeli and Palestinian conflict, and the need for a two-state solution in accordance with international legitimacy.

“This vision brings peace and stability and gives the Palestinians their rights to establish an independent state,” he said.

Regarding the formation of a new Israeli government, Shoukry said that choosing the new government is an internal Israeli affair.

He indicated that Egypt is looking forward to communicating with the government in Israel, to continue its sponsorship of the peace process and the establishment of a Palestinian state.

Shoukry added that there is a set of diverse trends, and that Egypt is looking forward to the Israeli government taking difficult and courageous decisions that contribute to ending the Israeli-Palestinian conflict and for the countries of the region to be in lasting peace.

For his part, Asselborn stressed the importance of relations between Egypt and Luxembourg, pointing out that the current visit is the first since the novel coronavirus (COVID-19) pandemic started.

He said that Egypt plays a pivotal role in the region, and without it, it would not have been possible to reach a ceasefire agreement in Gaza.

“Hamas is not the problem, and that the real problem is the Israeli occupation of the Palestinian territories,” he added.