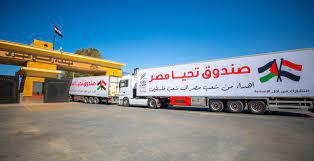 The Egyptian Armed Forces have dispatched large humanitarian aid shipments on board “Halayeb” ship to Lebanon.

This comes in implementation of the directives of President Abdel Fattah Al-Sisi, and in continuation of the Egyptian support provided to Lebanon.

The Lebanese officials expressed their appreciation for the continuous Egyptian support, stressing that both countries share strong historical relations.

After wars with Israel, militant bombings, and domestic turmoil, Lebanon is now threatened by a devastating financial collapse, which the World Bank has said is likely to rank as one of the worst the world has seen in the past 150 years.