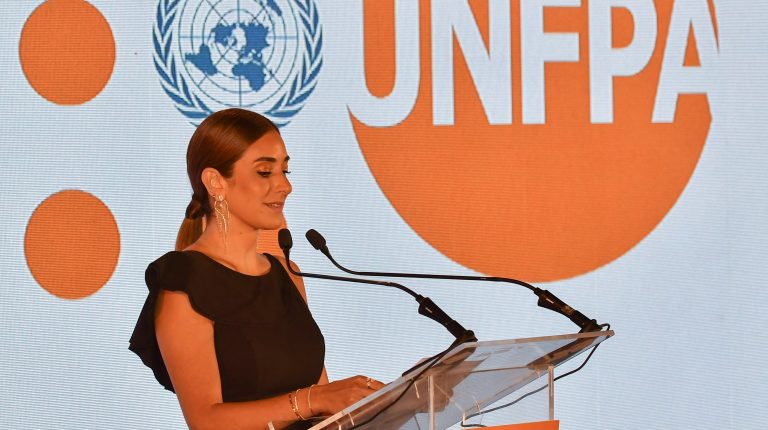 The United Nations Population Fund (UNFPA) in Egypt has announced that actress Amina Khalil has been appointed as an Honorary Ambassador.

Khalil is an advocate for women’s and girl’s rights, including reproductive health, besides her impressive acting career and talent.

The actress has been engaged with UNFPA over the past few years, participating in different activities to amplify relevant messages to the communities. Through her work, she boldly sheds light on different topics seldom tackled in mainstream media.

The announcement was made at an open-air event hosted by Frederika Meijer, UNFPA Representative in Egypt, and Luay Shabaneh, UNFPA Arab States Regional Director.

The event brought together: Egypt’s Minister of International Cooperation Rania Al-Mashat; Ismail El Far, Director of the Central Administration for Training and Projects, on behalf of Ashraf Sobhy, the Minister of Youth and Sports; Maya Morsy, President of the National Council for Women (NCW); along with several ambassadors and eminent leaders from civil society, the private sector, and the media.

The reception was also held to honour UNFPA Deputy Executive Director, Ambassador Ib Petersen, currently on his first visit to Egypt since joining the organisation.

Petersen is expected to hold several high-level meetings to discuss the fund’s cooperation and support to Egypt, one of UNFPA’s biggest operations in the region.

“I am delighted that UNFPA engages with renowned celebrities like Amina Khalil,” Petersen said, “I am confident that her prestige, talent and voice will help transmit UNFPA mandate to the hearts and minds of people.”

Minister Al-Mashat highlighted the importance of the strategic partnership between Egypt and UN agencies. She added that Egypt has made strides in the women empowerment portfolio since it hosted the International Conference on Population and Development in 1994, and congratulated Khalil on her announcement as Honorary Ambassador.

“Art is a way to change cultural perception and the participation of women is critical,” Minister Al-Mashat, said at the event.

For her part, Morsy also lauded the selection of Khalil as UNFPA Honorary Ambassador, saying, “We’re here to celebrate Egyptian women and the younger generation.”

El Far underlined the partnership between the Ministry of Youth and Sports and UNFPA, which aims to raise awareness around population issues among young people.​

Through her partnership with UNFPA, Khalil is committed to empowering women and girls and shedding light on important population issues. This includes further helping UNFPA achieve the International Conference on Population and Development (ICPD) Program of Action.

“Now it is time to act for women and girls everywhere,” Khalil said, “[This means] Bold steps to improve the lives of women, mean a better future for children and families.”

Shabaneh said, “Honorary Ambassadors are of particular importance for UNFPA engagement with the public, and having such a beloved, passionate, and popular Ambassador like Amina is a great opportunity to advance the rights agenda and ensure women and girls have the choice for bodily autonomy.”

“Our messages have to reach communities, and using a famous actress like Amina Khalil will help,” she said, “Entertainment has proven to be a useful tool to engage with people.”

She noted that guaranteeing reproductive health for all and gender equality is key to the wellbeing of people.