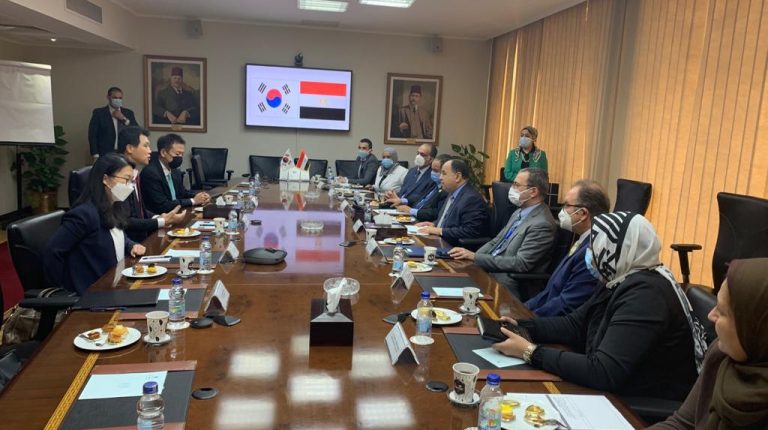 Ambassador Hong expressed thanks to Minister Maait for his participation at the forum organized by the Korean Embassy in Cairo on the recent government’s customs and tax reform measures, despite his busy schedule. He added that the Minister’s presence and open discussions he had with Korean investors reflects the keenness of the Egyptian government to support investors and gives assurances to Korean companies operating in Egypt.

Ambassador Hong emphasized that yesterday’s forum together with the recent visit of Korean Minister of Defense Acquisition Program Administration (DAPA) to Egypt and the visit to the Suez Canal Zone area on June 8-9 aimed at exploring new investment opportunities and opening up win-win cooperation between the two countries.

Ambassador Hong hoped that these efforts could be culminated by fruitful deliverables with the visit of the Korean President to Egypt which was scheduled for last year but was postponed due to the pandemic.

Ambassador Hong hailed the Egyptian government’s efforts to support and ease difficulties facing Korean companies. He added that the best way to stimulate Korean investments to Egypt is to showcase the success stories of Korean companies currently operating in Egypt and to continue the finance ministry’s active support to companies to stabilize their business and operation in Egypt.

In this regard, the Ambassador pointed out that 14 Korean companies attended yesterday’s meeting, adding that the presentation by the Egyptian Customs Authority on the Advanced Cargo Information System ACI was indeed of great help to many Korean companies and addressed their concerns regarding the new system that will be applied as of 1 July 2021. He said that the gathering between the ministry’s officials, Embassy and Korean Companies offer an exceptional opportunity to discuss plans for promoting our bilateral ties, expressing hope to hold such meetings on a regular basis to keep up the momentum.

In addition, both sides exchanged views on the possible MOU for cooperation between the Korean and Egyptian Ministries of Finance, as well as the updates regarding the convention between Korea and Egypt on the avoidance of double taxation and the project on the public e-procurement system. The two sides also discussed possible participation of Korean Companies in desalination projects under the PPP scheme.