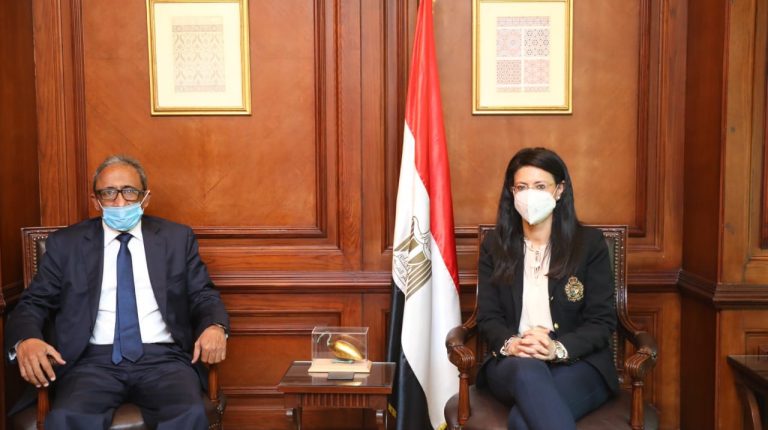 During the meeting, Al-Mashat and Al-Ni discussed means of cooperation between the Ministry of International Cooperation and CAEU.

The meeting also reviewed how to develop the council’s role and performance, and ways to activate its mechanisms.

Al-Ni assumed his duties during the General Secretariat of the council’s 111th session held in Cairo last June.

Minister Al-Mashat stressed Egypt’s support for the council’s role in advancing Arab economic integration through trade and investment. This takes place by facilitating intra-trade relations among Arab countries, and by exchanging capital and labour to enhance livelihoods.

The minister said that the council would work to develop its mechanisms and objectives to fully restore its governance and achieve its objectives. This would take place alongside developing economic studies and research that can be presented to specific committees of the council.

The research shall be focused on exploring the necessary means to increase the effectiveness of member states, pushing towards an Arab economic integration.

Also during the meeting, both sides put forth the need to streamline the efforts of the Arab federations, in order to benefit from their affiliations and efficiently achieve their vision for economically integrated Arab countries.

The Arab Marketing Agency and the Arab Court of Arbitration are the two entities recently developed by the council, with the sole focus on settling economic disputes within the Arab Federations.

This is with a view to easing their work and facilitating the development work in the area, aspiring for a regional economic growth.

From his part, Al-Ni applauded the efforts made by the Ministry of International Cooperation as Egypt’s permanent representative at the CAEU. He also highlighted Egypt’s support for the council’s role in developing its mechanisms and promoting joint Arab coordination.

The CAEU was initially established as a specialised Arab regional organisation in 1964, with its permanent headquarters in Cairo.

In accordance with Article 3 of the council, it aims to organise and consolidate economic relations between Arab countries based on compatibility through natural and historical ties. The council also aims to secure the best conditions for economic prosperity.

The importance of these efforts lies in the need to strengthen economic unity among Arab countries by creating economic integration and by supporting countries in facing economic challenges regionally and internationally.