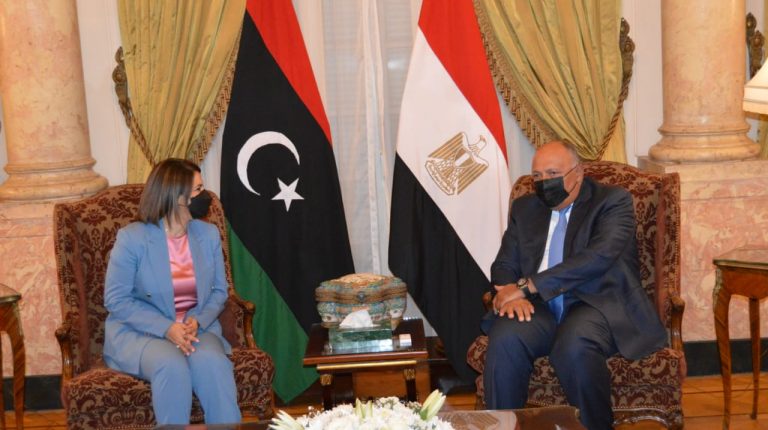 Egypt’s Minister of Foreign Affairs Sameh Shoukry has affirmed Egypt’s continued keenness to provide all support to Libya in its endeavours to start a new phase of internal reconciliation.

Shoukry’s remarks came during a joint press conference held with his Libyan counterpart Najla Al-Manqoush, where the two sides discussed developments on the Libyan scene.

The Egyptian minister said that the two sides agreed on the importance of pushing forward the agreed steps and procedures as part of the political process, including holding elections before the end of the year.

He said that Egypt is greatly concerned with the situation in Libya and is continuing its tireless efforts internationally to restore Libya to stability in order to preserve its security, stability and capabilities for the sake of its people.

“The Berlin 2 meeting, scheduled for next Wednesday, comes after the current Libyan interim government took over and as part its efforts to implement all the outcomes that were approved in the Security Council,” Shoukry added

He stressed the importance of holding presidential and legislative elections next December, as well as the exit of foreign forces and mercenaries from Libya, the disbanding of militias, and the strengthening of Libyan institutions.

Shoukry added that those countries meeting in Berlin have a responsibility to put in place all mechanisms to enable and assist the brothers in Libya to achieve these goals.

“Egypt will contribute to this and continue its close coordination with all Libyan parties, whether the government or politicians in the House of Representatives,” he noted.

Shoukry renewed Egypt’s support for holding the Libyan elections on time, as a way of establishing a civil and democratic state. He also highlighted the importance of Libyan national reconciliation efforts as one of the pillars of stability.

For her part, Al-Manqoush stressed the importance of ensuring the holding of national elections in Libya in December 2021.

The minister noted “the need for the full implementation of the 23 October 2020 ceasefire agreement with all its provisions, including the immediate withdrawal of all foreign forces and mercenaries from Libya”.

She said that the Libyan Government is working to rearrange the country’s internal workings, in an effort to achieve comprehensive stability.

Al-Manqoush renewed her refusal of Libya hosting any foreign bases, forces, or mercenaries, because their stay is not acceptable.

She indicated that the urgent priority for Libya is to reunite the country and then push towards political, security and economic stability.