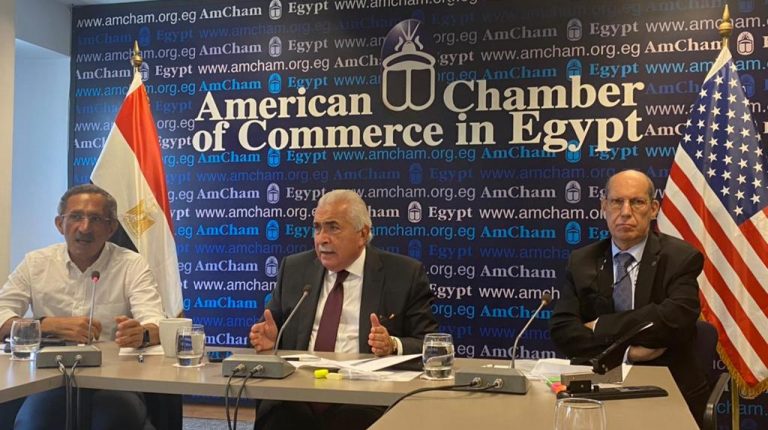 A door-knocking mini delegation of board members of the American Chamber of Commerce (AmCham) in Egypt and the Egypt-US Business Council (EUSBC) is expected to visit the US in the fourth quarter (Q4) of 2021.

Tarek Tawfik, President of AmCham in Egypt, said the visit will be the first by the chamber since US President Joe Biden took office.

Speaking to journalists on Thursday, Tawfik added that the Egyptian-US relations are now entering a warmer and more objective phase. As a result, it is necessary to work well during the coming period to advance the relationship and bilateral partnerships.

He said that the Biden administration offers promising and specific prospects for cooperation with Egypt, as it is not as turbulent as it was under former President Donald Trump. It is, instead, an objective relationship, evidenced by Biden’s promise that he will present to Congress the same annual aid programme that Egypt has previously received, without any proposals for reduction.

Tawfik believes that there is enough evidence pointing to the fruitful future for relations between Egypt and America, and the return of relations to a better level than they were before.

“Egypt’s intervention in Palestine and the role played by President [Abdel Fattah] Al-Sisi was a major reason behind the breaking of the stalemate in relations between the two countries,” Tawfik said.

He noted that the acceleration of important visits from the US side during the previous month and Biden’s contact with his Egyptian counterpart, which lasted for more than an hour, is evidence of that.

With regard to the Grand Ethiopian Renaissance Dam (GERD) file, Tawfik said that Al-Sisi’s important role in the Palestine file will ensure the US a strong ally for Egypt.

This is due to the US being the most powerful player on the world stage in this field, and Egypt having successfully restored its position in the Arab arena.

EUSBC Head Omar Mohanna agreed with this view, adding that a new strategic dialogue began between the two countries with Biden taking power in the US.

Mohanna noted that the response mechanism in many files provides an opportunity for more communication in many fields with the US side.

He said that the relationship cannot be reduced to the human rights file, as it is a file that is less visible in the file of cooperation between the two countries

The current strategic dialogue is based on important economic components that allow the economic partnership between the two countries to take a new form.

Mohanna highlighted that the US is presenting the Trade and Investment Framework Agreement (TIFA) it has with Egypt in a new way. This is based on negotiations on the achievements made by the Egyptian state in the field of infrastructure and legislation.

According to Mohanna, “there are success stories and achievements that we can rely on”, although there is still some bureaucracy, but this is feasible and will be resolved soon.

In 1999, Egypt and the US signed the TIFA, but despite this, no decisive steps have been taken since then, and there have always been obstacles that could see the agreement’s termination.

Although the free trade agreement file between Egypt and the US does not have a priority at the present time, especially for the US, the expected special relationship between the two countries during the coming period opens the way to present the file in Egypt’s interests, Mohanna said.

He said that US companies show a special interest in the Egyptian market, evidenced in the online meeting held by President Al-Sisi with 25 of the largest US. The level of representation by the heads of companies at this meeting was very large.

In this context, Hisham Fahmy, CEO of the AmCham office in Washington, said that US companies are set to visit Egypt next year. This is due to their interest in the Egyptian market and in order to develop US investments in Egypt.

Fahmy said that AmCham in the US is working closely to communicate with the authorities there, and keep them informed of the achievements and success stories that occur in Egypt. This is with a view to achieve the best form of cooperation between the US and Egypt.

To achieve a strong and real boost in relations, Tawfik believes that there are two files that represent a real challenge for companies operating in Egypt, namely customs and taxes.

Despite the revolution that took place in the field of infrastructure and legislation, the volume of investments flowing into Egypt is still not commensurate with these reforms, he added.

“We are optimistic that President Al-Sisi will work to remove obstacles in these areas during the coming period, after he referred last week to the digitisation of customs,” he added.

Mohanna made note of the importance of removing these obstacles, especially as it is expected that international companies will resurrect their accounts during the coming period, following the novel coronavirus (COVID-19) pandemic crisis.

Egypt has a diversified economy and a large local market, Mohanna said, and this is a good start for any project, especially since Egypt is an important regional centre.

“Therefore, if we overcome bureaucratic obstacles and good marketing of our capabilities, we will succeed in attracting new investments in the short period of time,” he said.

Mohanna said that the fact-finding mission that will travel to the US will add a new dimension to its trips, which is to build on the steps of the state.

He pointed out that the first trip by the mission will target the state of Texas, particularly as Egypt has set up a partnership with the armed forces in the state.