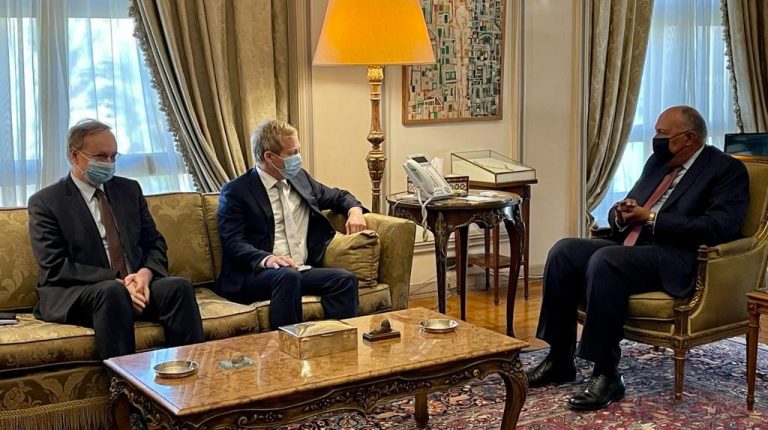 Ahmed Hafez, the official spokesperson for the Ministry of Foreign Affairs, stated that Shoukry expressed his aspiration to continue cooperation between Egypt and the European Union (EU) during the coming period in order to advance the peace process in the Middle East.

Shoukry reiterated Egypt’s continued efforts to stabilise the ceasefire in the Gaza Strip in order to achieve the desired calm and stability.

This is in parallel with supporting the reconstruction efforts and meeting the development needed in the Palestinian territories during the coming period.

Shoukry also stressed the importance of having a real will and an appropriate atmosphere to urgently revive the negotiating track in order to reach the establishment of an independent Palestinian state on the borders of 4 June 1967, with East Jerusalem as its capital.

This would be in accordance with the decisions of international legitimacy, and in a manner that achieves a comprehensive and just peace in the region,

He expressed the aspiration for the European Union (EU) to continue its role to provide the necessary support for the Palestinian cause at all levels.

For its part, Compans praised Egypt’s role in supporting peace efforts in the Middle East, which culminated in reaching a ceasefire agreement in the Gaza Strip, as well as its continuous efforts to achieve Palestinian reconciliation.

He expressed his aspiration to continue coordination and consultation with Egypt to support the current efforts to advance the peace path and the importance of activating the role of the International Quartet during the coming period in this regard, in a way that contributes to achieving security and stability in the region.