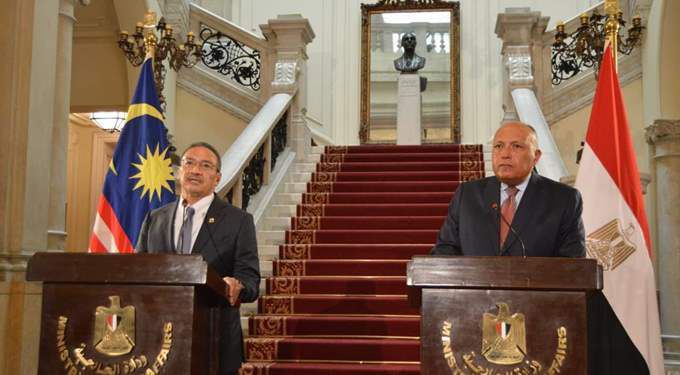 He praised the bilateral cooperation between the two countries, especially at the economic and trade levels, as well as joint investments.

This comes as part of Egypt’s consistent policy of openness to joint cooperation, construction, and development with all countries, within the framework of principles and values ​​of mutual respect.

Rady added that the meeting touched on regional and international issues of common interest, especially regarding combating terrorism, as it is one of the most important challenges facing the world.

Shoukry affirmed Egypt’s keenness to strengthen cooperation with Malaysia, and noted that he and his Malaysian counterpart agreed to take further measures to achieve a shift in priority areas, especially at the economic level.

In a joint press conference with Hussein, Shoukry indicated that Egypt is looking forward to holding the joint committee and businessmen forum.

He noted that there is a move to explore opportunities for cooperation between the two countries during the coming period. This includes providing the appropriate atmosphere to enhance economic cooperation, with Shoukry praising the economic boom that Malaysia is witnessing.

Shoukry also affirmed the Egyptian-Malaysian consensus on the Palestinian issue, and on ways to resolve the issue. He stressed the importance of the Palestinian people obtaining their rights through the establishment of an independent state.

He said that, during the next stage, more coordination will take place on the Palestinian issue, developments in the Middle East, climate issues, and the effects of the novel coronavirus (COVID-19) pandemic.

Meanwhile, Hussein praised Egypt’s leading role played at the regional and international levels, and its active role in combating terrorism and achieving security, stability, and peace in the Middle East.

He said that the two sides agreed to hold a joint committee at the level of foreign ministers, as well as meetings for business forums.

“Malaysia wants to participate in large projects in Egypt, which is the gateway to Africa,” Hussein added.

The Malaysian minister stressed Egypt’s role in the Palestinian issue, and applauded the country’s mediation in the Palestinian-Israeli conflict, which succeeded in creating a ceasefire in the conflict. He also thanked Egypt for vaccinating Malaysian students studying in Egypt.