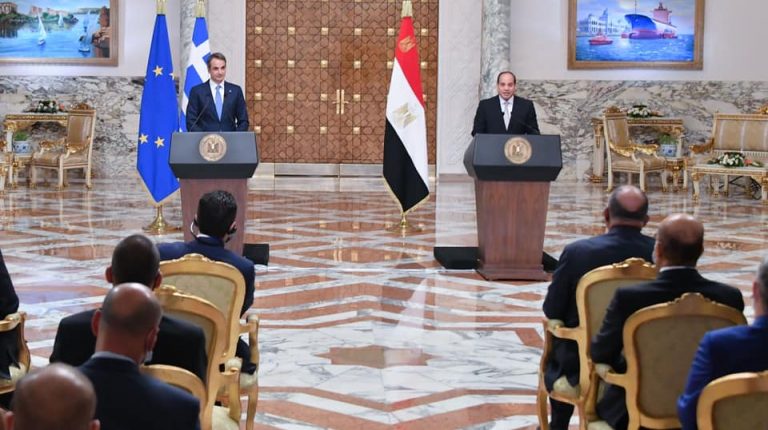 During the meeting, Al-Sisi stressed the need for the international community to play a serious role in resolving the GERD crisis, to preserve the stability of the region.

In a joint press conference on Monday, the Egyptian President said that the two sides discussed the tripartite negotiations on the controversial Ethiopian dam.

Al-Sisi noted the need for all countries to commit to the international law, non-interference in internal affairs, and respecting sovereignty of territorial waters.

He said that the past few years have witnessed a remarkable growth in the volume of cooperation and joint coordination between the two countries on many issues at the political, economic, and military levels.

Al-Sisi highlighted Egypt’s firm stance towards the situation in the Eastern Mediterranean region, and the need for the commitment of all countries to the international law.

The President renewed Egypt’s solidarity with Greece against any practices that would violate its sovereignty. He said that his meeting with Mitsotakis was a good opportunity to exchange visions and coordinate positions on a number of regional issues.

Mitsotakis expressed his hope for a solution to the GERD crisis through negotiations, and highlighted his country’s support for Egypt’s position. He also noted that the waters of the River Nile represent a matter of life.

Meanwhile, the Greek Prime Minister added that there is consensus with Egypt on the need to bring peace to Libya, and the withdrawal of foreign forces from its lands.

He said that he also discussed with Al-Sisi the situation in the eastern Mediterranean, and stressed the need to respect international conventions and the rights of countries in the region.

Mitsotakis explained that the Mediterranean Sea should be a link between peoples rather than a barrier between them, and said that the agreement on defining the maritime borders between Egypt and Greece is a model to follow.

The Greek Prime Minister’s visit comes as part of Greece’s keenness to exchange visions and viewpoints, and to deepen aspects of bilateral cooperation between the two countries in various fields. This includes setting up consultations on regional and international issues of mutual interest.

Both leaders reviewed aspects of bilateral cooperation between Egypt and Greece, and it was agreed on the need to achieve a qualitative leap in relations. This includes: increasing the value of trade exchange; encouraging the flow of Greek investments; enhancing cooperation in the field of energy; supporting tourism cooperation; and benefiting from the accumulated experiences of the two countries, among other issues.