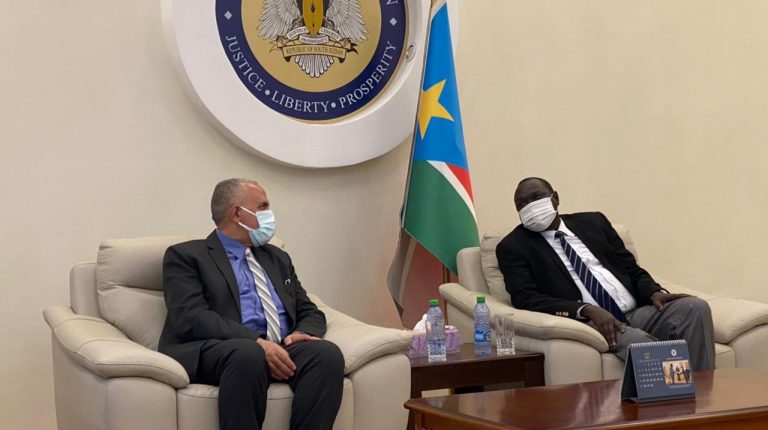 Egypt’s Minister of Water Resources and Irrigation Mohamed Abdel Atty arrived in the South Sudanese capital Juba, on Monday, at the head of an official delegation.

The official four-day visit is set to come to an end on 25 June.

Upon arrival, the minister said that this important visit comes as an expression of Egypt’s belief in the need to achieve the utmost levels of cooperation and coordination between the two countries. This aims to achieve sustainable development and raise the standard of living for South Sudan’s citizens.

Abdel Atty added that the cooperation between the two countries has been in place for several years, during which many development projects were implemented.

The two ministers are scheduled to discuss the progress made in joint cooperation between the two countries in the areas of water management. Abdel Atty will meet with a number of senior government officials in South Sudan, in addition to inspecting the progress of work in many projects that Egypt is implementing.

Egypt’s Ministry of Water Resources and Irrigation has established six groundwater stations in Juba, in addition to seven other underground drinking water stations in important government institutions in the capital. These include the main sports stadium in Juba and the College of Law.

Additionally, a lifting unit was also installed to transfer river water to population centres near the waterways in the city of Wau. This is in addition to the Ministry of Water Resources and Irrigation’s contribution in preparing technical and economic feasibility studies for the multi-purpose Wau Dam project.