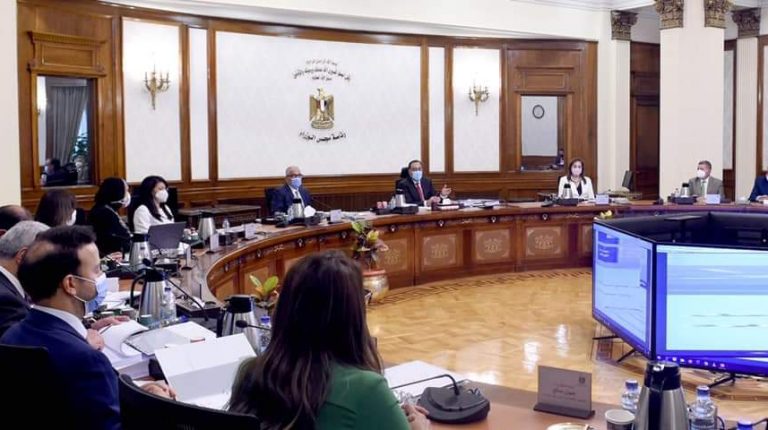 Egypt’s Prime Minister Mostafa Madbouly chaired a meeting of the Economic Ministerial Committee, on Monday evening, to discuss a number of important files, including measures to advance industry and industrial exports.

The meeting took place in the presence of: Tarek Amer, Governor of the Central Bank of Egypt (CBE); Hala El-Said, Minister of Planning and Economic Development; Rania Al-Mashat, Minister of International Cooperation; Mohamed Maait, Minister of Finance; Hisham Tawfik, Minister of Public Enterprises Sector; Nevine Gamea, Minister of Trade and Industry; Mohamed Abdel-Wahab, CEO of the General Authority for Investment and Free Zones (GAFI); and a number of representatives from the CBE and relevant ministries.

Nader Saad, spokesperson for the cabinet, said that the meeting discussed the proposed implementation plan for the advancement of industry, and the development of industrial exports.

The plan, which features 100 measures, is set to take place at the macro level and the level of priority industrial sectors.

Saad said that these procedures partly include a legal aspect related to encouraging investments and procedures related to the establishment of companies.

This is in addition to incentives provided by the state to stimulate the growth of investments in general during the coming period. There are also proposed incentives to support the industrial sector and industrial exports.

He added that among these measures, new incentives will be offered for industries with high and local technological components. This will, in turn, promote the industrial investment map by activating an updated electronic platform for investors to exchange information and data for various industries.

In addition to this, efforts will be put in place to provide studies and data related to each of the promising industries and opportunities.

The proposed procedures also include preparing an accurate inventory of closed factories, and preparing a report on the reasons for the halt in their activities. In addition to this, the efforts will also see the factories provided with support so they may restart, provided that other initiatives launched in this regard are first evaluated.

Saad noted that the meeting also witnessed a discussion of ways to support the industry, and a study of creating new financing incentives for exporters of targeted products in priority markets.

This will also see the terms of financing facilities eased and directing commercial representation offices in cooperation with specialised export councils to conduct market studies.

The measures also include: developing value chains in the food industries by expanding licences for establishing factories, cooling stations, and storage near farms; increasing support for the National Food Safety Authority and raising its technical competencies, which will contribute to facilitating export operations; and establishing a database of the best types of seeds.

Other proposed measures include: providing financing programmes to expand the establishment of automated and semi-automated slaughterhouses; monitoring and follow-up of free zones working in the field of leather tanning; and developing exports of components industry to encourage foreign and local companies to invest to deepen local manufacturing.

Among procedures also on the cards are: the review and simplification of the procedural and documentary cycle of customs release; completing steps taken to convert to the use of clean energy as fuel for cars; as well as enhancing industrial investment operations. This latter point relates to production activities to provide the local market needs of primary production requirements and intermediate goods.

At the same time, the ministers reviewed several proposals within the proposed plans to approve incentives to raise the competitiveness of micro, small, and medium enterprises (MSMEs). This would also provide opportunities to market the products of these projects by participating in local or international exhibitions.

The proposed procedures also include the need to develop a plan to increase and develop technical schools in Egypt. This would then transfer priority specialisations to them that correspond to the priorities outlined as part of national plans.

Madbouly said, “We will study observations and comments on the 100 procedures that were presented; in order to enable their activation and start implementation.”

He added, “Upon approval, a working group will be formed in the Council of Ministers to follow up on the implementation of each procedure, and to note any obstacles or challenges in this regard, in order to speed up the intervention immediately.”

Saad indicated that during the meeting, Egypt’s accession to membership with the African Finance Corporation (AFC) has been approved.

The AFC works to promote economic growth and achieve industrial development across Africa, whilst facilitating internal and external African trade. It also contributes to the development of the energy sector and extractive industries in the continent.

The meeting also witnessed a discussion of the country programme with the Organization for Economic Cooperation and Development (OECD). This aims to assist the selected countries to adopt the OECD standards as a tool for evaluating reform policies.

The executive steps taken by the coordination committee formed for this purpose were reviewed, along with a presentation of the content of the Egypt country programme and the definition of its connection to the structural reforms programme carried out by the state.

During the meeting, the most important points contained in the Investment Policies Aspirations in the Middle East and North Africa (MENA) ​​report, issued by the OECD, were reviewed.

The report seeks to assess investment policies in a group of MENA countries, and indicated that Egypt is one of the most prominent countries covered by the report in receiving investments in recent years.