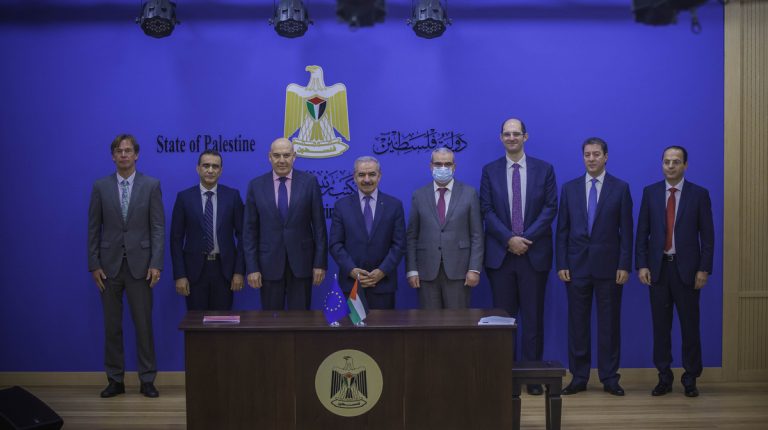 The European Investment Bank (EIB) has stepped up its support for the private sector in Palestine, as part of coordinated efforts with the European Union (EU).

The initiative forms part of Team Europe’s overall response to the novel coronavirus (COVID-19) crisis, and aims to support sustainable social and economic recovery in the region.

It also falls under the EU-EIB Economic Resilience Initiative (ERI), which is part of the EU’s response to the challenges in the Southern Neighbourhood. Amongst its primary objectives, the initiative intends to promote private sector development through support to small- and medium-sized enterprises (SMEs).

It recognises such enterprises as key players for generating economic growth and employment opportunities in Palestine.

The EIB signed three lines of credit, on Tuesday, with the Bank of Palestine, the Quds Bank, and Palestine Investment Bank, with the  amount of $50m, $32m, and $20m, respectively, which will be on-lent to local SMEs.

The EIB also signed a Letter of Intent with the Palestine Monetary Authority (PMA), with a view to making $200m available. This will contribute to the PMA’s efforts to provide financial relief to local SME’s impacted by the COVID-19 crisis

In addition, the EIB signed two risk-sharing agreements with The National Bank and the Bank of Palestine, backed by the European Fund for Sustainable Development (EFSD). These are expected to support a new portfolio of SME loans in a combined amount of at least USD 120m.

Alongside the financial support, the EIB is also committed to providing a comprehensive technical assistance programme aimed at supporting the development of an inclusive financial sector.

This will reduce the asymmetry of information between banks and SMEs, to improve access to finance in general and particularly underserved and vulnerable groups of the economy. These include SMEs impacted by the COVID-19 crisis, start-ups, and women- and youth-owned businesses.

The EIB also signed a $3.3m loan agreement with Vitas Palestine, which is expected to reach out to about 1,200 micro-entrepreneurs in Palestine. It comes as a top-up of the $5m facility signed in December 2017.

It aims to improve the resilience of the micro-finance sector to cope with the economic impact of the COVID-19 pandemic. It is part of EIB operations under the EU Risk Capital Facility (RCF) for the Southern Neighbourhood.

These agreements were signed in the presence of: Palestinian Prime Minister Mohammad Shtayyeh; Firas Milhem, Governor of the Palestine Monetary Authority; as well as, Sven Kühn von Burgsdorff, the EU Representative to Palestine. The signings took place on the occasion of the second EU–Palestine Investment Platform.

During the ceremony, Shtayyeh said, “This is a significant, timely agreement that intersects with the Palestinian government’s goals and priorities to support and strengthen the private sector, especially SMEs that have been affected by the COVID-19 pandemic.”

“Europe has always been on the side of Palestine politically, while providing economic support and building the institutions, in order to establish an independent and sovereign Palestinian state along the 1967 borders with East Jerusalem as its capital,” he added.

Commenting on the above transactions, EIB President Werner Hoyer said, “SMEs account for 95% of the Palestinian economy and play a vital role in creating and safeguarding employment, especially for young people and women.”

“This comprehensive package will enhance access to much-needed financial support for Palestinian private sector in the midst of the current, unprecedented crisis,” Hoyer added, “As the EU Bank and a key contributor to Team Europe, we value our partnership with local intermediaries who will implement the schemes with us.”