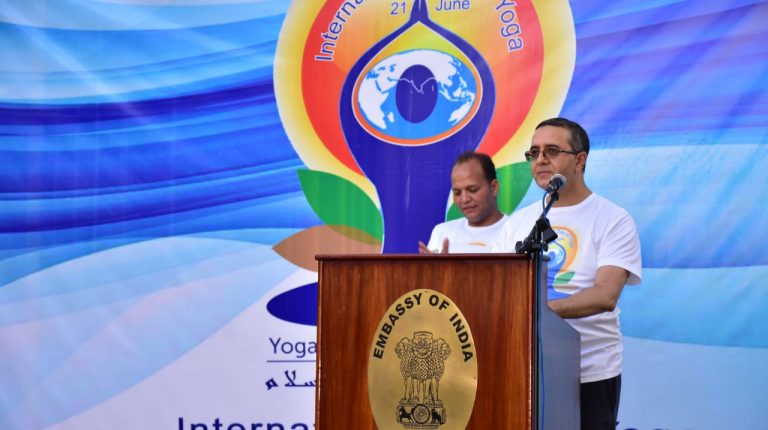 Talking about the cultural relations between the two countries, Gupte said, “I must say that in the short time that I have been here, I have found that there is a lot of warmth among the Egyptian people on different levels towards India.”

He noted that both countries are both very ancient civilisations, and that he was personally really surprised that people are so interested in Bollywood.

“Egyptian people are so warm and friendly to India, and they’re interested in various aspects of Indian culture,” he said, noting that he also hopes that during his tenure as ambassador, the two countries can take steps to strengthen this.

This interview came on the side-lines of the celebrations for the 7th International Day of Yoga, where the ambassador organised a special event at his residence. A number of diplomats, journalists, and two Egyptian actresses, Dina Abdullah and Mirna Walid, attended the event.

Gupte told Daily News Egypt that Yoga is an ancient Indian practice, with the first surviving records found on the practice dating back to at least 5,000 years ago.

Yoga has become increasingly popular over the last few decades, and Indian Prime Minister Narendra Modi, following his election in 2014, proposed that the United Nations (UN) recognise yoga with an international day celebrating the practice.

“In 2014, the UN, by a huge majority of 177 countries, passed a resolution recognising 21 June as the International Day of Yoga,” the ambassador said, “After that, we have been celebrating yoga in iconic locations in the capitals, all across the world.”

Gupte mentioned that yoga on its own has become very popular across all ages, adding, “I think it is extremely relevant today, because yoga is one way of building your spiritual, physical and mental well-being.”

“There are many other activities which concentrate a lot of them only on physical fitness, but yoga helps to build one’s mental strength and one’s concentration,” he said, “It helps to think a little more positively, and it also helps to build the body’s immunity.”

He mentioned that as the world is facing the novel coronavirus (COVID-19) pandemic, the main protection that people can have is to have a healthy mind and a strong healthy body. This is not just from physical fitness, but also from the state of mind.

“That is where regular practice of yoga can be immensely beneficial, and the best thing is that we don’t require any sports equipment, you don’t need to go to the gym, all you need is a mat and to do yoga at home,” he noted.

Gupte said that Egypt and India have great historical context with each other, and highlighted the period of very special friendship between then Egyptian President Gamal Abdel Nasser and Indian Prime Minister Jawaharlal Nehru. He added that, in the last few years, there have been also frequent high level visits between Egypt and India.

“I hope we can have more high level visits, despite the pandemic, but I will also do my best to strengthen the economic ties, encouraging more Indian companies to invest in Egypt,” the ambassador said.

He concluded that there are many ways for Egypt and India to cooperate, including through energy, pharmaceuticals, and even in water conservation.

Gupte also noted that, as more people are taking the vaccine against COVID-19, it may be possible for people to start travelling again, which will see more frequent visits.