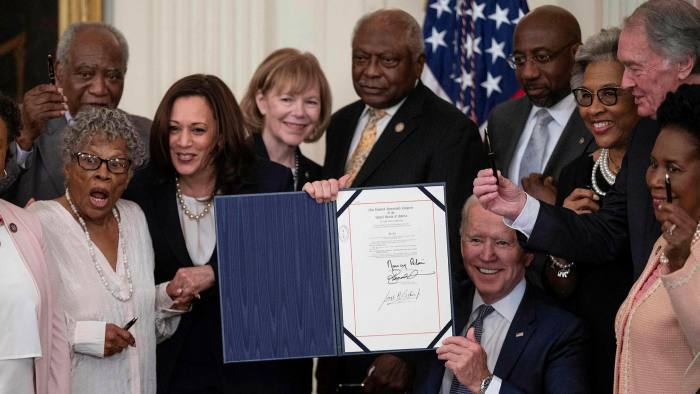 A few days ago, Republicans and Democrats in the US Congress agreed to declare 19 June as a federal (national) holiday, to commemorate the manumission of the last slaves in Texas in 1865.

While President Abraham Lincoln issued the Emancipation Proclamation on 1 January 1863, it applied only to people in the Confederate states, and not to those enslaved in Union-controlled territories.

In Texas, in particular, slavery remained in place even after the 13th Amendment was passed on 31 January 1865, as it was the last state to be controlled in the civil war.

Finally, on 19 June 1965, Union troops landed in Galveston, Texas, to tell the enslaved African-Americans living there that the Civil War had ended and that they were now free.

For this reason, the Emancipation Day, or Juneteenth, a word that combines the name of June and the date of the 19th, was considered an official holiday in Texas only, and unofficial in the rest of the states. However, activists at present, especially after the George Floyd demonstrations, have felt that the time has come to adopt this day as an official holiday throughout the United States, just like Independence Day or Labour Day.

Nevertheless, this decision raises important questions about whether the decision to free the slaves was a decision for the sake of justice and humanity, or was it for political exploitation.

The other question is about whether recognising the liberation of slaves today as a national holiday is also a confirmation of the approach taken by President Joe Biden’s administration to supporting human rights, or whether it is an attempt to satisfy an important electorate that contributed decisively to his success in the past elections.

In fact, we used to look at the emancipation of slaves in the US as the greatest humanitarian work done by President Abraham Lincoln, the sixteenth president. History books are also replete with his statements about the rejection of racism and the necessity of spreading equality, justice, and freedom within the US.

Despite this, and although these allegations have become an indisputable fact, the documents of President Lincoln debunked the falsehood of these allegations, and showed another shocking face to this legendary president.

The documents are considered one of the main sources of US history, especially concerning the issue of the liberation of slaves. They give a clear picture of the opinions and suggestions that the president and his advisors exchanged during the war.

These documents were obtained by the eldest son of President Lincoln, who submitted them to the Library of Congress for preservation in the Archives, and they were opened to the public in 1947.

These documents also recently represented a rich source for many historical types of research that revealed many facts completely different from the facts we studied about US history, especially the history of slavery.

Surprisingly, these documents confirm beyond any doubt that the decision taken by President Lincoln to free the slaves was not deliberate or planned, and human motives did not play a significant role in its issuance.

Rather, it was a forced military and political decision, aimed at ending the war by surrendering the rebellious states and declaring their obedience and loyalty to the Union government.

In his inaugural address to the presidency, for example, Lincoln said “I have no aim, either direct or indirect, to oppose the institution of slavery in the United States wherever it may be found.” In another letter also to the Vice President of the Confederation, Lincoln emphasized that “the fears of the South that the new Republican administration will do what would abolish slavery in the South, directly or indirectly, are unjustified fears and have no basis in reality.”

Moreover, on 30 August 1861, General John Frémont, commander of the Northern Army, declared the Confederate slaves free. Despite this, Lincoln quickly rescinded the decision, fearing the wrath of the border states.

The Lincoln Documents reveal dozens of telegrams he received in support of Vermont’s move, and the harsh criticism the president received for overturning that decision.

The Lincoln Documents also contain a very important letter to the New York Tribune, which summarises his view and policy towards slavery.

Finally, the documents reveal the fact that the Emancipation Proclamation was nothing but a threatening ultimatum from President Lincoln to force the rebellious states to surrender within 100 days, or to be considered in rebellion and their slaves to be free forever.

As a result, the freed slaves continued to suffer from the deterioration of their economic conditions for long periods.

This struggle started from the declaration of the liberation of slaves until this day, where recent changes in American policy towards African-Americans confirm that the George Floyd demonstrations have become a milestone in the history of the US and succeeded in changing history.