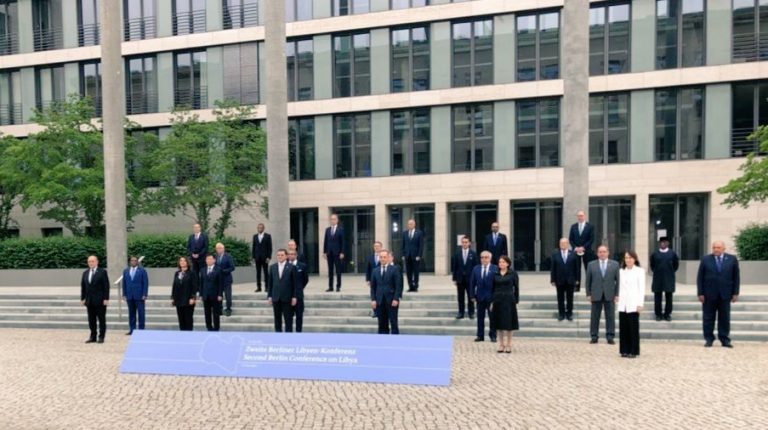 The Berlin II conference highlighted, on Wednesday, the importance of holding elections in Libya in December, as planned, and ending foreign interference in the country.

The conference also called for the implementation of the road map aimed at ending the transitional phase and stabilising the country.

The conference, which was called by Germany and the United Nations (UN), saw the participation of representatives from 20 countries and international organisations, most notably the US, Russia, China, the Emirates, Egypt and the UN.

Egypt stressed the importance of holding legislative elections on 24 December, whilst seeing the withdrawal of foreign fighters and mercenaries, and dealing with the militia issue.

In his speech at the Berlin II conference, Egypt’sMinister of Foreign Affairs Sameh Shoukry said that the outcomes of the talks will provide a pathway so that Libya can achieve peace.

He reiterated his country’s firm position on the need to protect Libya’s sovereignty, independence, and territorial integrity, and support the aspirations of the Libyan people to build a better future.

Shoukry stressed the need to support efforts aimed at moving forward with the comprehensive political process, led by the Libyans, to end the conflict. This would also achieve the withdrawal of all foreign forces and mercenaries, and disarm armed groups.

For his part, Prime Minister of the Libyan Government of National Unity Abdel Hamid Al-Dabaiba said, “Berlin II sends a message of hope that there is no return to war, no to tampering with Libya’s wealth, and no to disagreement outside the dialogue table.”

“We are reviewing together the commitments of the first Berlin Conference, and the achievements of this stage, which are already many, but also insufficient”, he added.

He referred to the dangers that still surround Libya on its path to actual unity and stability, and the establishment of a democratic, sovereign, and effective state.

Al-Dabaiba added that 18 months after the Berlin I conference, there is a unified government that operates in extremely difficult conditions, and which requires decisive and historic positions.

He stressed that one of the most important outcomes of the Berlin process is to bring together the influential countries in Libya in a common framework to bring views closer.

It remains now for the Libyan voice to be the basis in these international frameworks and structures, welcoming all communication, openness, and rapprochement between the gathered countries, Al -Dabaiba said

For his part, US Secretary of State Anthony Blinken confirmed that the US agrees with the international call for mercenaries to exit from Libya. He pointed out that Washington wants it to be a stable country free of foreign interference.

Blinken added that the Libyan elections must be held in December as planned, and thanked Germany for its interest in the Libyan issue because of its impact on regional security. He indicated that all foreign forces must withdraw from Libya, as well as the establishment of a ceasefire.

Germany’s Foreign Minister Heiko Maas, he said that the message of the Berlin 2 conference is the need to end foreign interference in Libya and respect the arms embargo.

He pointed out that Germany is working to ensure mercenaries are removed from Libya, and that it is seeking international support to guarantee holding elections and the unification of the army.

“We understand the difficulty of reunifying Libyan institutions, but it is possible,” Maas added during his speech at the conference.

He said that this comes hand-in-hand with the dismantling and demobilisation of armed militias to achieve a basic principle that stability does not take root in its absence.

Aboul Gheit added that there should be only one weapon in Libya, which is the weapon of the Libyan state and its institutions, including the army and the police.

He pointed out that there should be no legitimacy other than that granted by the Libyans of their free will in the legislative elections next December.