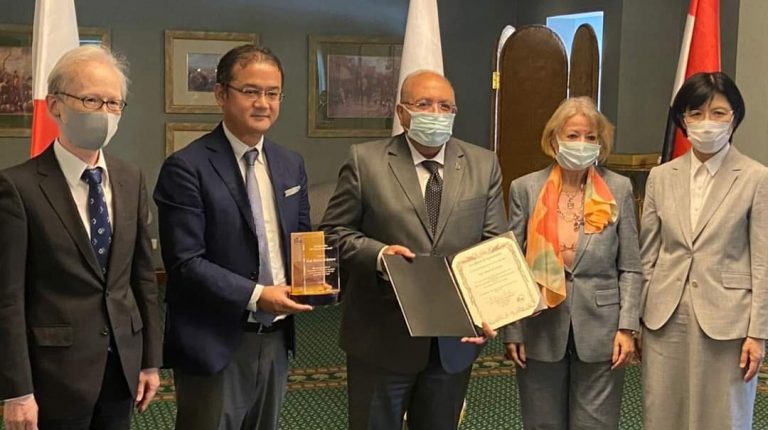 The presentation of the award took place in the presence of: Fayza Abou El-Naga, Chairperson of the Board of Trustees at E-JUST; Kayashima Nobuko, Senior Vice President of JICA; Noke Masaki, Ambassador of Japan in Egypt; and other members of the university’s Board of Trustees.

El-Gohary received the award in recognition of his outstanding contributions to JICA’s operations in Egypt. This is in addition to his strengthening and promoting the cooperation between Egypt and Japan throughout his long career in the academic field, especially during his tenure as E-JUST President since 2014.

He extended great contributions to boosting the relations between Egypt and Japan, especially with respect to the Egypt-Japan Education Partnership (EJEP), through his leadership of E-JUST.

El-Gohary has also supported and promoted developing educational partnerships between Egyptian and Japanese universities, and strengthened E-JUST’s links with its industrial partners.

He has been always committed to enabling the university to become a Center of Excellence of higher education and advanced research, not only in Egypt, but also in the Middle East and Africa (MEA). This is especially through the initiative to grant 150 scholarships to African students supported by JICA, within the framework of the Seventh Tokyo International Conference on African Development (TICAD7).

This aimed to enhance network and contribute to the development of African countries, as a joint collaboration between the Egyptian and Japanese governments.

El-Gohary also led the initiative to introduce the Japanese Modernisation Lecture Series, also known as JICA Chair, at E-JUST to transfer Japan’s modernisation and development cooperation experiences in the light of its historical and cultural background.

He is an ex-participant of the JICA Knowledge Co-Creation Program, and based on his experiences in Japan, he initiated the Third Country Training Program (TCTP) at Suez Canal University (SCU) and Fayoum Universities (FU) in cooperation with JICA.

JICA extended its gratitude and appreciation for El-Gohary’s continuous cooperation and friendship. It will continue to work with him for more achievements in the fields of scientific research and human capital development.

From his side, El-Gohary expressed his deepest thanks and appreciation to the JICA Egypt Office for such recognition, and extended his sincere respect and highest consideration to JICA and the Government of Japan.