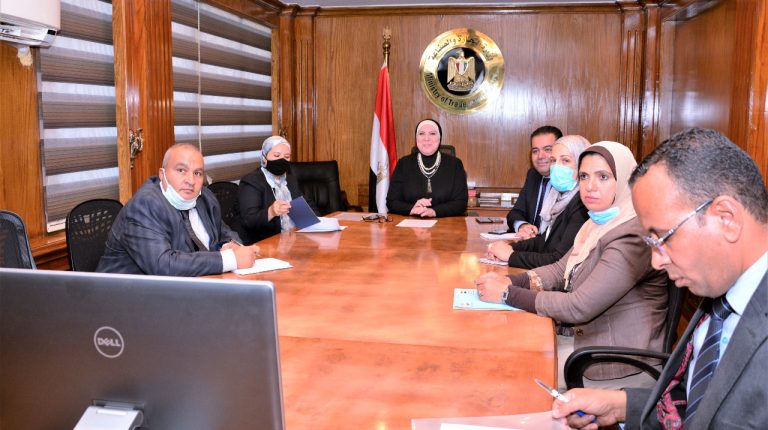 Egypt’s Minister of Trade and Industry Nevine Gamea has held an expanded session of online talks with her Moroccan counterpart, Moulay Hafid Elalamy, on the future of joint economic cooperation.

The discussions also sought to enhance trade relations and joint investments between the two countries during the next period.

Gamea said that the two sides agreed to form a working group from the two countries’ Ministries of Trade and Industry.

This will identify the obstacles and challenges facing the movement of trade exchange and investment cooperation between the two countries, in addition to finding radical solutions to them as soon as possible.

The minister noted the importance of launching a work mechanism between the two countries based on clear procedures and specific time controls. This is with a view to facilitate the entry of Egyptian exports to the Moroccan markets, and Moroccan exports to the Egyptian market.

Gamea said that the coming period will witness intensive meetings at the ministerial and technical working groups levels with the Moroccan side, to discuss all files of joint economic cooperation. This will also review the challenges that hinder the flow of intra-trade and joint investments between the two countries.

For his part, Elalamy affirmed his country’s keenness to strengthen joint economic cooperation relations with Egypt, especially in the trade and investment sectors. He noted the importance of activating joint action to achieve a balance in the rates of trade exchange and adjusting the trade balance between the two countries.

He highlighted the importance of working to solve all the problems and challenges that hinder the flow of intra-regional trade and the flow of joint investments between the two countries.

Elalamy also pointed out the importance of increasing intra-regional trade rates between Egypt and Morocco.

The meeting was attended by: Ashraf Ibrahim, Ambassador of Egypt to Morocco; Dina Mahmoud, Head of the Central Department of Trade Agreements and Foreign Trade Sector; Noha Kamal, Director of West Arab Department at the Egyptian Commercial Service; Ahmed Shawky, Head of the Economic and Trade Office at the Egyptian Embassy in Morocco; and Abdel Wahed Rahal, Director General of Trade at Morocco’s Ministry of Trade and Industry.