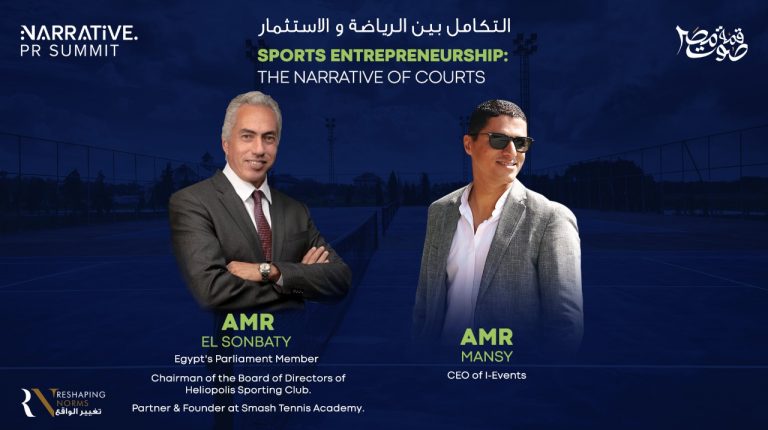 A new episode of Narrative Summit – Reshaping Norms 2021 was released on social media platforms, in which experts and specialists discussed the integration between sports and investment. Amr El-Sonbaty, Member of Parliament and Chairman of the Heliopolis Sports Club, founder and partner of Smash Academy, and Amr Mansi, CEO of I-Events and founder of El Gouna Squash Festival, also shared their ideas on the future of sports tourism in Egypt and how international tournaments held in Egypt could help achieve state goals of sustainable development.
Amr El-Sonbaty said: “To expand the base of sports practitioners, we must encourage investment in sports by both the state and the private sector. We started the idea of private and specialized clubs more than 25 years ago through the Smash Academy club and found great demand and success. One of the most important factors to encourage sports investment is the provision of land at a special price as the nature of investment in sports is different than any other project. Sports investment is an investment in people’s health, which is good of the state as a whole.”
He added: “The revitalization of sports tourism is linked to the increase in the number of tournaments held in Egypt and thus the increase in the number of foreign tourists, which puts Egypt on the map of global sports. It also markets Egyptian sports facilities and encourages foreign clubs and the world’s countries to visit Egypt, organize local matches, or training camps in Egypt. Meanwhile, sports can highlight the state’s efforts in developing slums – similar to the reconstruction of Ezbet Al-Haggana, which has become Al Amal District. We should work to establish more sports facilities within these communities to improve its residents’ lifestyle. I hope that sports will become a way of life for all Egyptians of all ages, which not only improves their physical health, but also mental wellbeing and productivity.”
For his part, Amr Mansi, CEO of I-Events and founder of El Gouna International Squash Open said: “I started organizing the El Gouna International Squash Open because of my love and passion for squash. I wanted to offer something different to the people of Egypt. The first tournament was in 2010 – and with it; many champions were born. There were no major international tournaments organized in Egypt at that time, but now, after 10 years, from the establishment of the first tournament, squash became an influential sport in Egypt. Consequently, all players have found sponsors, which helped them grow into professional players. The investment in players and tournaments expanded the fanbase of the game and lured in more people to join and play. The result is now, in Egypt, we have two of the eight biggest tournaments in the world.”
Discussing the entrepreneurship competition that he launched, Mansi said: “I thought that there should be a competition for young entrepreneurs for projects that started and were able to achieve success and make an impact in their field. The advisory committee for the Entrepreneurship in Egypt Award was chosen to be made of a number of the top economists and entrepreneurship in Egypt. The competition included more than 15 industries, including architecture and design, fashion and jewellery, e-commerce, education, physical health, media and advertising services, and tourism, amongst others.”
He added: “The award ceremony was held recently at the foot of the pyramids, where the most prominent entrepreneurs and project owners were honoured in appreciation of their efforts, in the presence of a group of the most prominent businessmen, economists, and public figures in Egypt, to support entrepreneurship as one of the main drivers of economic growth. This will definitely contribute to encouraging creativity and innovation and promote the emergence of a new generation of entrepreneurs.”
This episode from the Narrative Summit – Reshaping Norms 2021 is part of the online series that launched last year on social media. The summit gives the stage for experts and specialists in various issues to present their success stories and thought-provoking thoughts to the public, with a focus, this year, on optimism. The 2021 series builds on the great success achieved in 2020, when Narrative Summit launched five seasons of its flagship online forum Reshaping Norms, receiving great follow-up on social media, hitting 11 million followers, 4.5 million views, and 3.5 million interactions.