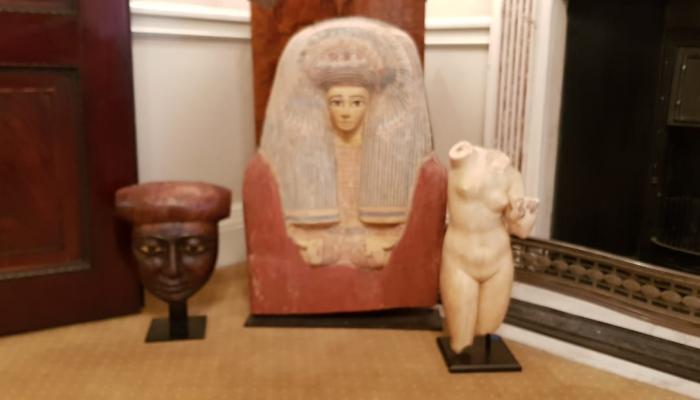 Egypt’s Prosecutor-General Hamda El-Sawy, and a high-level delegation from the country’s Public Prosecution, received in Paris, on Wednesday, 114 Egyptian artefacts that had been smuggled into France.

The artefacts date back to different eras of the Ancient Egyptian civilisation.

The Egyptian Public Prosecution’s investigations, in cooperation with French judicial authorities, had succeeded in stopping all attempts to sell the smuggled Egyptian antiquities.

During El-Sawy’s visit to Paris, he was accompanied by Mostafa Waziri, Secretary-General of the Supreme Council of Antiquities, and the Director of the General Administration of Recovered Antiquities.

The recovered antiquities were transferred by France’s Ministry of Interior to Egypt’s Embassy in France, to be examined under the supervision of the Egyptian Public Prosecution before their transfer back to Cairo.

In a ceremony hosted by the embassy, Egypt’s Ambassador to France Alaa Yousef praised the joint collaboration, and described it as an achievement adding to the record of Egyptian-French bilateral relations.

Meanwhile, El-Sawy expressed his appreciation for the cooperation between the Egyptian and French judicial authorities, adding that it is necessary to continue cooperation in the field of counteracting the theft of antiquities.

He asserted the need to develop a strategic plan for exchanging experiences between the two countries in the field of criminal investigation.

El-Sawy confirmed the need for effective cooperation between all parties in different countries in the field of combating organised and transnational crimes. This includes terrorism, money laundering, antiquities smuggling, human trafficking, and violence against women.