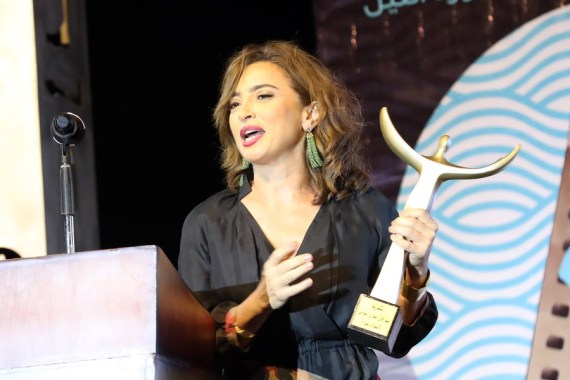 The fifth edition of Aswan International Women Film Festival (AIWFF) opened on Thursday night in this charming Upper Egyptian city with the participation of 12 feature films and 14 short ones focusing on women’s rights and causes.

“It’s an exceptional edition that is held in difficult conditions the whole world is going through,” said Hassan Abo el-Ela, the festival’s director. “We work on two parallel directions: the cinema in general and the women’s causes in particular.”

Egyptian, Arab and international filmmakers, actors and actresses gathered on the red carpet at the front yard of a hotel in Aswan on the bank of the Nile River, during the gala that was held under the proper anti-coronavirus precautionary measures.

“It’s a distinguished festival. As a woman, I care for women’s issues and I present them … My latest film is my own production and it is written by a woman and directed by a woman,” Egyptian well-known actress Elham Shahin told Xinhua on the red carpet.

Running from June 24 to 29, the AIWFF is held under the auspices of the Egyptian ministries of culture and tourism and the sponsorship of Aswan Governorate and a number of organizations including Egypt’s National Council for Women (NCW).

Following the red carpet reception, an opening ceremony was held on an open-air theater overlooking the Nile River, where a number of filmmakers, stars and women’s advocates received honorary awards handed to them by Egyptian Culture Minister Inas Abdel-Dayem and the president of the festival Mohamed Abdel-Khalek.

Among those honored was French actress and writer Macha Meril, who has been in the profession for more than six decades and whose generation made a difference in the cinema industry.

“The cinema now is in the hands of women. When I first started, there were very few female directors … Now in the schools of cinema, there are more girls than boys, which means cinema has become a feminine art,” the French veteran actress told Xinhua.

The festival doesn’t only screen films but also holds workshops to develop the filmmaking skills of the youth in Aswan and Upper Egypt in general. A referendum on the best 100 films on women in the Arab cinema will be organized for this year’s edition.

Egyptian actor Ahmed Wafik, member of the youth workshops jury, referred to the organizers of Aswan International Women Film Festival as “heroes” as they managed to hold it this year and bring all those filmmakers and stars from different parts of the world despite the challenges.

For her part, Egyptian famous belly dancer and actress Dina Talaat, who is commonly known as Dina by the Egyptian audience, described the festival as “brave and respectable.”

“I believe that woman is the pillar of the society and if she is represented in many movies and TV series it could give a push forward to the family,” Dina told Xinhua.