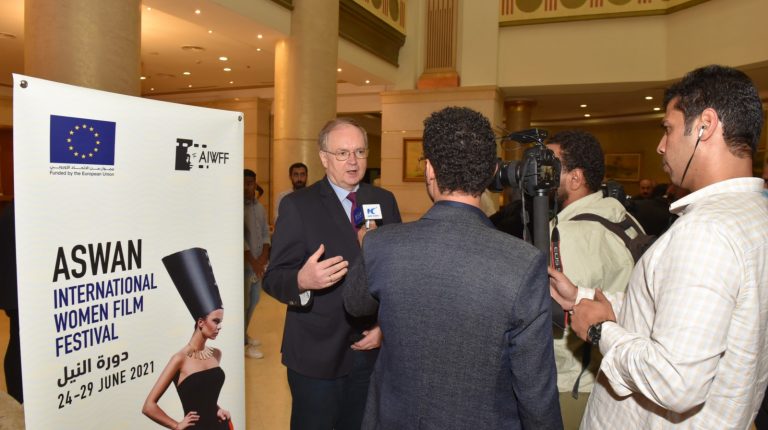 This year, the Aswan International Women Film Festival (AIWFF) is set to enjoy participation from a number of European Union (EU) Member States and Mediterranean Countries.

The participation demonstrates a strong interest in a very special festival dedicated to women. In the framework of the EU-Egypt Partnership Priorities, the EU works with Egypt in support of programmes and initiatives that promote women and youth’ empowerment, and cultural exchanges.

Christian Berger, the EU Ambassador to Egypt, said, “Our contribution to the festival has become a centre piece of the EU Gender Action Plan and the New Agenda for the Mediterranean.”

“I am very pleased that with the EU’s support, we put a spotlight on films and the cinematic industry addressing women’s rights,” he added, “Young women and men, especially from Aswan, have been trained to use cinematic art as a means to promote shared commitments.”

Through the strategic partnerships, the EU will continue to support young women and men in achieving their aspirations, Berger noted.

Cinema has a considerable influence in shaping people’s beliefs, values and perception of reality. It can influence stereotypes that may hinder women to achieve their aspirations as equally as men. The EU supports projects who promote gender equality and women and girls’ empowerment including in cinematic and cultural domains.

Last year, the EU in Egypt supported two workshops for scriptwriting and filmmaking, and this year, 210 young women and men from Aswan were selected to participate in six workshops.

These aim to address different cinematic domains, through the EU support in cooperation with EU National institutes for Culture (EUNIC), namely two workshops in scriptwriting and filmmaking.

Ten films were produced in the workshops and will compete during the festival, with the winning film to be announced during a special closure for the workshops on 28 June.

In March 2021, a total of 71 young people, namely 39 women and 32 men, participated in the EU supported two workshops on filmmaking and script writing.

The EU is awarding a special prize of €3,000 to the best film addressing women’s rights and empowerment that will be delivered to the winner during the closure ceremony on 29 June 2021.

The AIWFF is taking place from 24-29 June in Aswan, to celebrate the successes, achievements and creativity of women both in front of, and behind, the camera.

The EU in Egypt is supporting the festival this year, the first ever Egyptian film festival dedicated to women’s issues. The AIWFF is dedicated to highlighting women’s related issues and their right to achieve their fullest potentials.

It is an important occasion through which cinematographers representing different countries renew their dialogue about the important role of women in society.