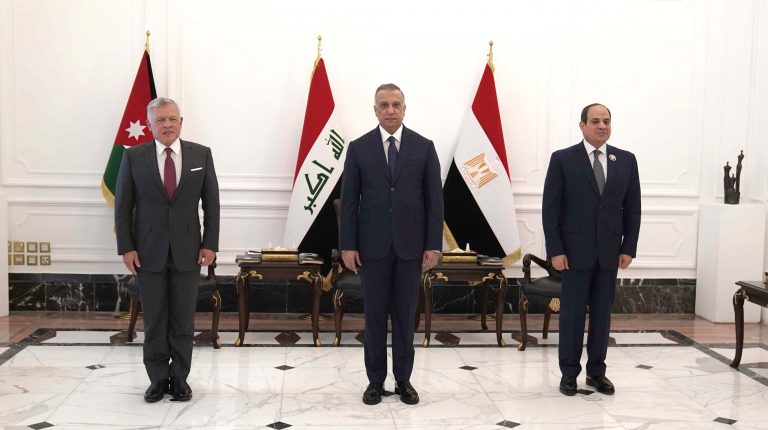 Egypt’s President Abdel Fattah Al-Sisi has joined a tripartite summit, with leaders of Jordan and Iraq, to address issues in the Middle East.

He noted that the successive international and regional developments require joint cooperation to confront common challenges and dangers. This is especially with the rejected regional interventions that threaten Arab national security.

During his speech before the tripartite summit on Sunday, Al-Sisi called for the unification of Arab countries, and for efforts to strengthen the Arab role in the various regional crises.

Also participating in the summit are King Abdullah II of Jordan and Iraq’s Prime Minister Mustafa Al-Kadhimi. Al-Sisi arrived in Baghdad on Sunday morning in the first official visit by an Egyptian president to Iraq in 30 years

Developments in the Palestinian cause topped the discussions between the three leaders, who affirmed support for the Palestinian people in obtaining their legitimate rights. This includes the establishment of their independent state in accordance with the relevant international legitimacy resolutions.

“This historic summit comes as a continuation of what was achieved during the Cairo and Amman summits,” Al-Sisi said, “We hope this will truly be the inauguration of a new phase of strategic partnership and close cooperation between our countries in an effort to launch sustainable development and prosperity for our peoples.”

“Emphasising Egypt’s belief in the need for cooperation and solidarity between our brotherly countries, I note that Egypt is putting its medical capabilities forward to support its brothers to confront the exceptional epidemiological situation that the whole world is going through, and that it continues in this approach based on its responsibilities and belief in its role towards its brothers,” Al-Sisi said.

The president also pointed to the dangers of terrorism and extremist ideology that the Middle East is facing, and which requires more joint efforts to defeat it.

He added that this issue represents one of the priorities of Egyptian policy, due to its direct threat to the country’s national security.

Al-Sisi reiterated that Egypt’s consistent position requires the necessity of reaching a binding legal agreement on the rules for filling and operating the dam. He also expressed support for the water rights of both Iraq and Jordan.

Regarding the Libyan issue, Al-Sisi said that Egypt is working to reach a political settlement in accordance with the Berlin Conference and the Cairo Declaration, as well as other international related efforts.

He stressed the need to end all external interference in Libya, and for foreign forces and mercenaries to leave the country.