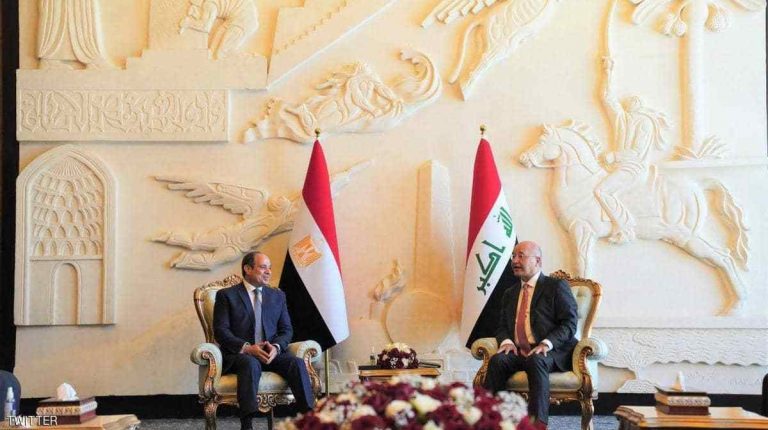 It’s the fourth round of the tripartite cooperation mechanism that was launched in Cairo in March 2019.

Al-Sisi’s participation in the tripartite summit in Baghdad aims to build on the achievements of the previous three summits held between the three countries. It aims to evaluate development in various fields of cooperation, whilst following up on projects being implemented.

This comes in the context of supporting and deepening the distinguished historical relations between the three countries, in addition to strengthening political consultation. During the meetings, the two sides discussed ways to address the challenges facing the Arab world and the Middle East.

Iraqi President Barham Salih held a session of talks with Al-Sisi and his accompanying delegation at the government palace in Baghdad. The Egyptian delegation consisted of the Head of Egypt’s General Intelligence Service (GIS) Abbas Kamel, and Minister of Foreign Affairs Sameh Shoukry.

The visit reflects the strength of the long-standing historical relations between Egypt and Iraq, and to confirm Egypt’s keenness to support and develop these relations towards broader horizons. This comes as part of the unity of destiny and challenges, and in response to the common interests of the two countries.

After his meeting with the Iraqi president, Al-Sisi met with Al-Kadhimi, in which the two sides held talks on a number of files of common interest.

Bassam Rady, Spokesperson for the Egyptian Presidency, said that Al-Sisi and Al-Kadhimi discussed the brotherly relations between the two countries, which have witnessed great growth during the past few years.

This is in addition to addressing ways of strengthening economic and trade relations between the two brotherly countries, whilst consulting on regional issues and files.

The Egyptian Center for Strategic Studies believes that the Egypt-Iraq-Jordan alliance is feasible on the map, with Jordan acting as a connecting knot, due its position, that integrates the eastern wing of the Arab region with its heart in Cairo.

The study also said that the idea of linking Cairo and Baghdad via Jordan crystallised early in the 1980s, when the Arab Cooperation Council was established on 16 February 1989. The council was formed under the initiative of the late Iraqi president Saddam Hussein, after the end of the Iran-Iraq war.

At the time of its establishment, it included only three countries beside Iraq, namely Egypt, North Yemen, and Jordan. It was presented as a model for achieving Arab integration in political, security, and economic affairs.

However, Iraq’s invasion of Kuwait in 1990 put an end to the possibility of linking the eastern front of the Arab region, in the form of Iraq, with its surroundings as a whole, the Egyptian Centre for Strategic Studies also added.

Moreover, it added, “The idea of ​​linking came back again, through a World Bank report published in 2014, which raises the possibility of linking the Levant countries through Egypt”.

An international expansion based on the dismantling of the Arab regional security system from northern Iraq and Syria to south Yemen to western Libya; It prevented the World Bank from coming close to the realism needed to implement the project, so that the proposed matrix of seven countries is reduced to include only three, namely (Egypt + Iraq + Jordan).

However, the new Levant was a solution project on the agenda of the government of former Iraqi President Haider Al-Abadi, who held the role from 2014 to 2018. There were, however, obstacles that prevented the start of the inauguration activities of the coalition.

The most notable of these obstacles was the fact that Iraq was plunged into chaos to get rid of ISIS, which had claimed large swathes of the country from the outskirts of Baghdad to Mosul. The efforts to recapture an area the size of the UK turned into a major guerrilla battle involving international forces.