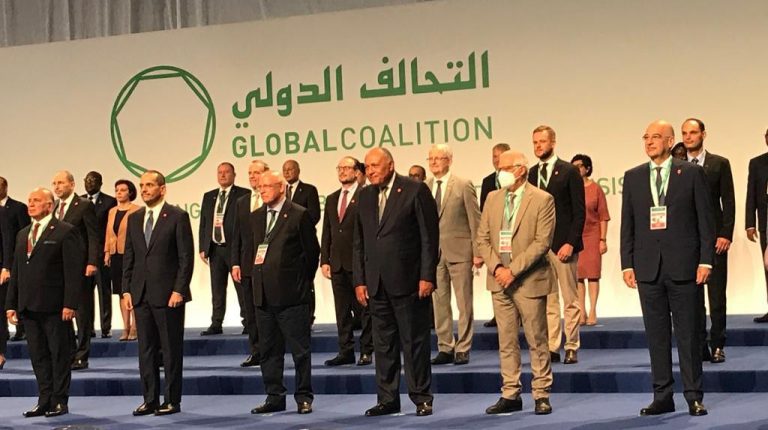 Egypt is committed to supporting international efforts against the terrorist group known as the Islamic State of Iraq and Syria (ISIS), according to Minister of Foreign Affairs Sameh Shoukry.

He said that ISIS remains a real threat, despite the success achieved in liberating large areas of territory controlled by the terrorist group in Iraq and Syria.

Speaking at the Ministerial Meeting of the Global Coalition to Defeat ISIS in Rome, Shoukry stressed the need to strengthen joint efforts of coalition member states to eliminate the threat posed by the group.

He pointed out that this approach is not only based on the security dimensions, but also takes into account the intellectual dimensions. This is through reforming and modernising the religious discourse and dismantling the false discourse on which the terrorist elements are based.

In this regard, he noted the role played by Sunni Islam’s highest institution, Al-Azhar, in refuting false interpretations of religious texts and correcting misinterpretations in a manner consistent with sound Islamic teachings.

Shoukry also expressed Egypt’s concern about the increased activity of ISIS affiliates in some areas of Africa. He stressed Egypt’s commitment, in this regard, to strengthening cooperation with African countries in the field of combating terrorism.

The minister reiterated Egypt’s full commitment to the coalition’s goals and its support for efforts to achieve stability and reconstruction in Iraq and Syria.

He also affirmed its determination to eliminate all terrorist groups that adopt the ideologies and objectives of ISIS.

For his part, US Secretary of State Anthony Blinken stressed the need to make efforts to preserve the military capabilities of the US-led international coalition against ISIS.

Blinken revealed that 10,000 IS fighters are still being held by the Syrian Democratic Forces. He also noted that the alert level should not be lowered now; saying that IS cannot be allowed to regain its strength.

Meanwhile, Luigi Di Maio, Italy’s Minister of Foreign Affairs, said that the international coalition against ISIS “has achieved important successes”, but “there is still a lot to be done.”

Di Maio indicated that Italy “will maintain a large military contingent presence to support the population and local institutions in Iraq.”

The minister said Italy would also take command of the NATO mission, at the end of the Danish presidency. He pointed out that “the military presence in Iraq will be in full agreement with the Iraqi government.

Di Maio noted that his country “will play its role for the stability of Africa and the Sahel region as well”. He proposed the creation of a dedicated “working group” for Africa, as part of the global coalition against ISIS.

Di Maio concluded his remarks by saying that in order to “eliminate ISIS, action to combat the sources of financing of terrorist organisations is also necessary.”